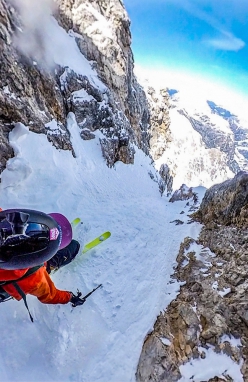 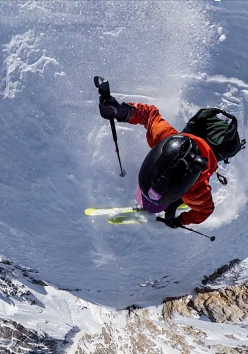 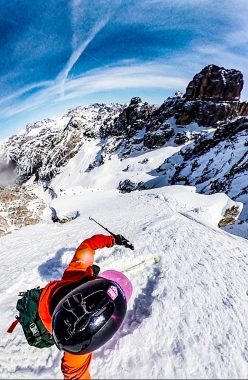 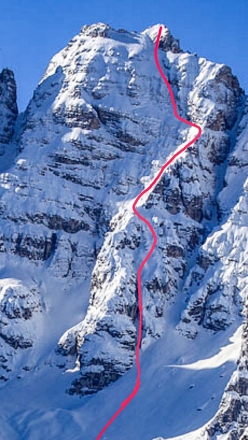 On Tuesday 23 March Aldo Valmassoi from Domegge di Cadore in northern Italy skied a new line down the north face of Cristallo di Mezzo, completing what is undoubtedly one of the most important additions to the Dolomites in recent memory. Skied the day after it was noticed, the line is extremely logical and was established by Valmassoi on his own and onsight, ie without having ascended the descent route beforehand but, instead, having reaching the summit via a different face. This onsight approach is the style that characterises most of Valmassoi's first ski descents because it offers "that added value that goes beyond the simple act of skiing, making the descents highly adventurous and artistic."

There are some lines that, when you first notice them, you start to yearn to ski them. You woo them, observe the face, sometimes wait for years even until the right conditions come along... But this wasn't the case with this latest descent, seen one day and skied the next!

To be honest this mountain had never really aroused my interest too much. Despite the fact that the Cristallo group is unquestionably spectacular, and that I'd already skied many of the classics and had added some challenging new variations , I actually prefer far wilder places. Those slightly less popular, off the beaten track. Because I don't ski mountains just because they're famous, but for what I feel when I'm there amongst them.

I ended up there on Tuesday because I often drove through Carbonin on my way to my physio sessions in March: on Monday I stopped the car to observe the peaks and simply enjoy watching the rays of sun as they reached the top of Monte Cristallo. And that's when I first thought about tracing a new line from the summit all the way down to the base of the north face.

As I observed the face I realised it would be possible, I sensed that technically it was certainly skiable but I couldn't see if it was a continuous descent as there were some bands of rock. From where I'd parked the car it was unclear, but I knew that more often than not things change considerably when you're actually on the mountain and that usually you can somehow find a way down. So I decided to skin up the next day and give it a go.

After the long stop I needed an adventure, to be up there in the mountains, in harmony just me and my skis. A new descent, completely on my own, was just what I'd been waiting for.

I skinned up from the opposite side and then dropped in from the summit. I chose this style as it's the one I like most, the one I've always tried adhere to actually, namely onsight. Climbing up one side, skiing down another.

This totally changes everything, because the descent becomes an unknown, a discovery. It's no longer just about technical skills, but intuition, the ability to evaluate a slope and prevailing conditions play a fundamental role as you search for the most natural, logical and beautiful line that enables you to draw a line from the mountain top to its base, created one meter after the next, as you ski it.

This style adds a fundamental component to the descent, namely adventure! That thing that above all motivates  me to do something, especially on that Tuesday after such a long enforced break.

After all, what really matters are the great emotions you experience at certain times, linked to respect, fear, wonder, the greatness and beauty of all those incredible things that we have around us and that I am lucky enough to be able to experience.

The result is a truly spectacular and complete line, open slopes, channels, traverses and ledges that make it the most beautiful, logical and elegant aesthetic of the Cristallo.

This is certainly not the steepest nor the most technical descent I've skied, but it certainly gave me what I was looking for.

I don't ski for setting records, for making first descents somewhere before someone else does. No, I go because it makes me feel good, because I like it, because it's one of the many ways I have to experience great emotions. Those things that ultimately accompany you for the rest of your life, that enrich and change you.

I am always grateful for being lucky enough to live these moments, to appreciate everything around me and to live among the most beautiful mountains in the world, the Dolomites.