► News ► Interviews ► Tomoko Ogawa and the Catharsis 8B+ interview 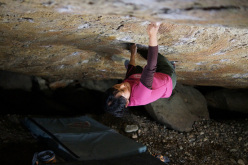 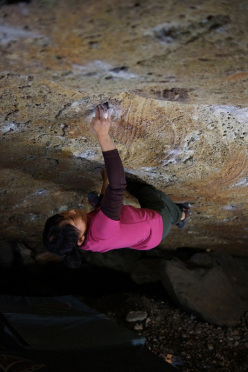 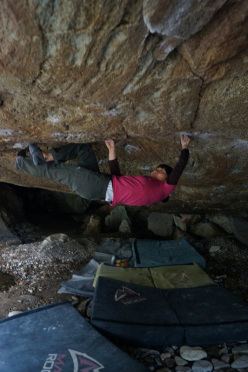 PORTFOLIO / gallery Portfolio: Tomoko Ogawa and the Catharsis 8B+ interview

Tomoko Ogawa and the Catharsis 8B+ interview

Interview with Japanese climber Tomoko Ogawa who made the first female ascent of an 8B+ boulder problem, Catharsis at Shiobara in Japan.

A few days ago Japanese climber Tomoko Ogawa took the climbing world by storm with her repeat of Catharsis, a fierce boulder problem at Shiobara in Japan established in 2005 by one of the worlds most authoritative boulderers, Dai Koyamada.

The news spread like wildfire because Catharsis is graded 8B+ and, as such, this climb checks in as the hardest a women has bouldered to date; previous bests have been made by the likes of Barbara Zangerl (Pura Vida, Magic Wood, Switzerland 2008), Angie Payne (The Automator, RMNP, USA, 2010), Anna Stöhr (The Riverbed, Magic Wood Switzerland, 2010) and young Ashima Shiraishi (Crown Of Aragorn, Hueco, 2012) but all these problems are considered in the region of 8B.

Another reason why Ogawa's ascent made headline news is that beyond the borders of the land of the rising sun, the 34-year-old certainly isn't a household name. At first glance therefore it might seem as if this performance came about from nowhere, but this isn't the case: the Japanese boulderer boasts problems up to 8A+ and above all a unique doggedness which fueled her dreams - and stopped her from giving up - for three consecutive years.


Tell us about your start?
I started climbing in 2000, when I was 22. I train a couple of days a week at indoor gyms close to home, and at the weekends I go climbing outdoors at places like Shiobara, Ogawayama and Mizugaki (close to Tokyo).

Do you only boulder?
Yes, now I only boulder, I love this far more than sport climbing. Until Cathersis the hardest I had done were a couple of V12's; Caramba by Dai Koyamada and and Mutante established by Yuji Hirayama. Now that I've done Cathersis I want to concentrate on a slab project which is my weakness. And I want to visit to many areas overseas.

In Japan you're a pro climber.
Yes, I'm sponsored by adidas and Mad Rock. I have taught climbing and have worked in Japanese TV talk shows. I have also spent time in some of the schools close to last year's big earthquake , to teach climbing and help cheer the children. This proved to be a really worthwhile experience.

Despite being well-known in Japan, before this ascent many climbers had practically never heard of you...
Yes, I'm not a world famous climber and I'm sure many don't know about me. I took part in World Cup competitions and always lost unfortunately, in truth I'm not that strong!

Well 8A+ means your not that weak! But the jump from 8A+ to 8B+ is enormous... why did you choose this problem?
Well, roof climbing is my style and one day I had an impossible dream of doing an 8B+. When I first tried Cathersis, everyone said it would be impossible for me because I had not done an 8B. But I never gave up. I kept on trying for three years for something that seemed impossible in the beginning.

Three years... did you ever think of giving up?
Yes! Sometimes, many times... The first section of this problem involves several pockets and the last section is very dynamic. In short, it's very steep and super fingery. The crux of this problem is the 5th move with the right three finger pocket and a left shallow pocket. I thought I needed more finger strength and reach to do this 5th move, in the beginning it was simply too difficult for me and this made my heart break. But I kept believing and spent about 30 or 40 days over the last three years on this problem, a few hundred attempts in total... I never lost faith in myself, and always trained more...

Last question: Catharsis, for you personally, perhaps the name couldn't be better...
I think Catharsis was a nightmare and a good dream for me. What it taught me is that, through perseverance and effort, dreams can come true.