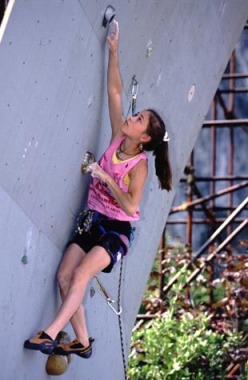 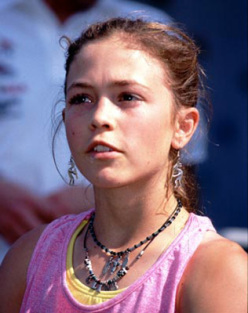 interview with Katie Brown by Nicoletta Costi and Nicola Noè after the 1999 edition of the Arco Rock Master.

In Europe most people know your name and what you look like, but the know little about you as a person. Can you introduce yourself briefly?

I was born in Colorado 18 years ago, my father is of Irish origin and my mother is of French Swiss origin. I am 5 feet tall weigh 85 pounds. My family moved to Kentucky where I started climbing when I was 13. I started with my mum and my brother (now 21, but he doesn't climb that much anymore). He liked to climb in Red River Gorge and I went with him because I was new and I didn't know anybody. So I just started. I trained in Red River Gorge for a long time. This summer I moved to Denver, Colorado, so I will now be climbing out there. I started to climb because I liked it and now it is just part of me. I also like running, making jewellery and pottery. It is hard to match all things together, though. Some things I do more often than others.

When did you start competing?
I started competing nationally when I was 14.

What are your best competition results?
I won the Rock Master in Arco twice, first in 1997 and then in 1998; 2nd place in Serre Chevalier and I also won this year's World Cup in Besancon.

This year you succeeded in climbing 8b on sight. Tell us about it.
The route is called "Omaha Beach" in Red River Gorge. I've also climbed lots of 5.13b's and redpointed one more 8b in a place called The Tower, in St. George, Utah … I don't know the name of the route.
I have climbed in Italy, France, Germany, I am going to Spain in October. I would very much like to go to Australia and Thailand.
I have never climbed on granite except in Yosemite Valley, traditional climbs. 1-day routes, like on Fairview Dome (Tuolomnee Meadows). I never remember names, I don't write them down, I climb them!

What are your thoughts on leading and bouldering?
I am a little afraid of falling, but leading is better then seconding. I like bouldering outside, but not in competitions. The best spot in the U.S. is Hueco Tanks.
Would you rather climb with girls or boys?
I prefer climbing with girls, but there are not so many, so I usually climb with men. Beth Rodden is a very good friend of mine, but it is hard to climb with her because she lives so far, in California.

Where do you train?
When I lived in Kentucky there was a climbing gym; then I went to Georgia, and since there wasn't a gym there, I had a wall in my garage. And now in Denver there are lots of climbing gyms and this is much better for training.

Do you consider yourself a professional climber?
I do not know. I can climb for many years, but I wouldn't make enough money to make a living. In America we have a sports climbing Federation, but it doesn't sponsor its climbers, so it is very difficult. School is the most important thing now.

Do you manage to attend school regularly?
I went to Community College, because there you can make your own schedule and it is easier for me to climb. My school is organised in semesters, nine weeks of school and then I break for 9 weeks. So I didn't go to school this semester but came to Europe. Next semester I'll be going back to school.

Do you ever get tired of climbing?
Yes, sometimes

12.09.1999
Arco - Rock Master 1999
Evgueni Ovtchinnikov and Muriel Sarkany win this year's Rock Master. Read about the competition and see photos and videos in our full report.

09.09.1999
François Legrand
Interview with a true sport climbing legend, one of the strongest French climbers who has won everything there is to win: the invincible François Legrand.