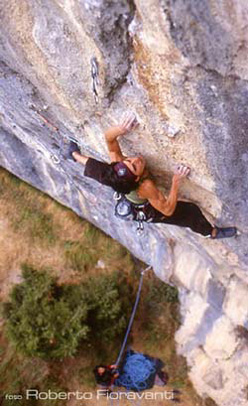 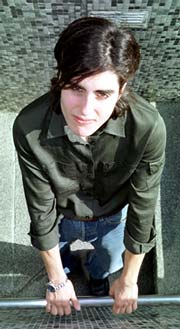 Spanish climber Josune Bereciartu, famous for being the first woman to have climbed 8c, has now redpointed Noia, Itay’s most famous 8c+.

THE NEWS by Federica Balteri - ALPwall
In October 2001 Josune Bereciartu and her partner Rikardo Otegi both redpointed Noia, Itay’s most famous 8c+, first climbed by the Italian Severino Scassa way back in 1993.

After first spending time around Nice they travelled west to Andonno to try this testpiece, without a doubt the most important route of their trip. Rikardo sent the 30m stamina link first, followed two days later by Josune.

Josune, who has already redpointed Honki Mix 8c+ (Oñate, Spain), needed just five days to climb this route. After congratulating Seve she confirmed that Noia is without a doubt one of the best lines she’s ever climbed.

INTERVIEW by PlanetMountain
If you had to describe yourself...
Josune Bereziartu is a female climber who wants to have fun when she climbs, nothing more, nothing less. I want to be the most normal woman in the world and have fun doing what I enjoy most: everything that revolves around the mountains - climbing, mountaineering, hiking. Everything connected to nature.

Is climbing everything?
No. But there are some moments during the year when climbing becomes more intensive and important...

The best and the worst thing about climbing.
I always say to Rikar that climbing is one of the most unpleasant sports I know. The truly good moments are very rare, but when they arrive I realise that I’m completely in love with climbing.

Female climbing
What can I say about that? It looks as if women are only present in competitions. It's obvious that this isn't the case but there are so few women climbing hard outside...

Three or four great places you would recommend in Spain?
I would recommend the areas near my home (entire Basque region) and Rodellar and Escalete (in Huesca) for sure. And also Montsant and Montgrony in Cataluña. It’s obvious that there are more super nice places but…

Your greatest satisfaction?
When I climbed my first 8a (Hiena in Oñate) and my first 8c (Honky Tonky, also in Oñate). The situation was very similar in both occasions - with Hiena I remember that I was very psyched, because moving up a grade from 7c+ to 8a is very hard due to the level of psyche needed. With the 8c it was similar, I knew I was the first woman in the world and that stressed me a lot. So when I climbed both routes it was immensely satisfying. As a result I found I could easily climb other routes just as hard or harder, under a lot less pressure. On-sighting some hard routes (in particular two 8a+ in the Basque region) made me feel proud, as other strong climbers such as Dani Andrada, Patxi Usobiaga Iker Pou had tried them unsuccessfully.

JOSUNE BEREZIARTU IN BRIEF
Profession: I work as an insurance seller for a company called Mapfre. I usually work in the afternoon so I have enough time to train or some days to climb in my home climbing areas.
Favourite crag: Escalette (an unknown crag in Huesca)
Training: When I want to train hard I can train for 4-5 hours.
Books : Is used to read a lot but now I’m pretty lazy. At the moment I’m reading "Fiesta" by Ernest Hemingway.
Music/hobbies: Music is one of my favourite hobbies. I like to listen to the latest trends. Club, electronic, Soul from the States etc… Photography is one of my recent hobbies too. It is so difficult to take good pictures...
Food: I eat healthy. So, I eat all healthy food especially fish and vegetables. I also really like sea food.
Objectives: Just to keep on climbing and continue to push my limits.
Dreams: A greener world

The first stamina section up pockets leads to a powerful lock on small edges before continuing via a crack to a rest at the start of the traverse.

Five hard moves on good but spaced underclings and poor footholds lead through the traverse. Two vertical edges constitute a rest at the end of the traverse, just before the final 7 moves up sloping pockets. The last three are precarious, in particular the dyno beneath the finishing roof. Linking all is the hard, but the difficulties then ease off and the final 5m of 7a ground lead more easily to the chain.

This is a total stamina route, perhaps the first of its kind in the world. It really trashes your skin! Congratulations to Josune and Rikardo.