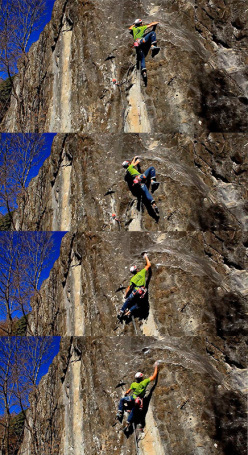 James Pearson, the Is not always Pasqua climbing interview

Interview with James Pearson after the first ground-up repeat of Is not always Pasqua E9 at Collina di Interprete (Monti Sibillini, Marche, Italy) and the first ascent of Pazienza E8 7a.

We first reported about this on Christmas day: James Pearson had repeated Is not always Pasqua at Interprete, Central Italy, the route established and freed in 2002 by Mauro Calibani that checks in one of Italy's hardest trad climbs, and also as one of the hardest and most beautiful in the "trad" world ranking. To give an idea as to the difficulties, the route could translate into an 8b/+, with a crux section - from mid-height to the mantle finish - reckoned to be about 7C/+ boulder. Obviously all trad though, protected only by nuts and friends. Pearson's ascent is the second repeat after that of Cristian Brenna in 2003 and Pearson's ascent came about on his third attempt, ground-up, without prior toprope practice and while placing all the gear during the ascent. Undoubtedly a great performance, described by British climber as "probably my hardest trad route to date." But before delving into the interview in which Pearson describes his ascent of Is not always Pasqua aswell as the first ascent of his nearby new route, it's important to underline and remember that vision from 11 years ago. We're talking about that "illumination" that Mauro Calibani had when he freed what he defines as "the route of his heart". This was first ascended in an era when trad, at least in Italy, was completely unheard of to most. At the time Calibani was the World Bouldering Champion. One of the best boulderers in the world therefore. And an absolute newcomer to trad. Yet he managed to envision his Is not always Pasqua and realize a superb dream of utmost valor. Chapeaux, to him, to his vision, to the route and also to the tireless warrior Cristian Brenna (he too, "merely" a sport climber) who followed in Calibani's footsteps to make the first repeat.

James, what brings a Brit to a hill in Central Italy?

There was a poster of this route on my friend's bedroom wall when I first started climbing. I think it was even before I had climbed an E9 in the UK, I remember marveling at how hard it looked, as well as how unusual the rock and the holds seemed. For the next 9 years I all but forgot about the route, until one day we randomly stumbled into Interprete for a little bouldering, and discovered from Cristian Brenna that Interprete was the also the home of INAP. The route looked even better than I remembered and I decided there and then that bouldering would have to wait, I had to give it a try.

That was back in 2012
Yes, my first attempt finished somewhat prematurely, I didn't have a big enough friend, so backed off before the upper crux. Let's not dwell too much on that...

OK, so what about this year?
This year I tried the route one time, then led the route successfully on my second ascent. I was lucky to have Caroline with me who wanted to try to head point the route. It was she who cleaned the route in the first place, which explains the tick marks you see in the video. My first attempt was a strange mix of slow and steady research, and heart in mouth moments. I climbed the route resting on the pieces of gear, figuring out the best options for the placements before committing to the next section. Climbing the upper crux was especially unnerving the first time. The holds are sloppy at best, the movements awkward and uncomfortable, and the gear is not exactly what I would call "bomber"! I was really happy not to fall and have to test the protection.

Which brings you to the Lead…
I rappelled from a tree to take out the gear (not touching any holds!), and after resting a while, climbed the route. I was happy enough with the protection of the route, and although it is not "safe", I have certainly climbed in more dangerous situations. The big problem however was the physical difficulty of the climbing, and I was anything but certain I would be able to climb it in one.

Add to this the fact that you placed the gear as you went
Despite its short length the route is really pumpy as there are few footholds between the two crux boulders, resting is not really possible and having pre-placed gear, in particular between the two cruxes, makes a big difference. With the protection pre-placed you can be sure that the very hard-to-place friend 5 is perfectly positioned, arrive, clip, chalk, and start the crux. Without the gear in-place, it's a completely different story! You have to hang on one arm for a long time whilst fiddling in the friend, praying it is well-placed without being able to see it. After switching arms, another two pieces of gear fatigue the other side, and you begin the top boulder completely destroyed!

You went for it nevertheless
I knew the lead would be pumpy, but I didn’t expect it to be quite as pumpy as that. As I made the first long move of the boulder, I was shocked at just how destroyed I was. My hand started to uncurl off the hold, and I had to fight to re-adjust just to stay on the wall. If the last 3 years of sport climbing have taught me anything, it's that you can always dig deeper than you think, and your body can often find a way if you can just give it the chance. I turned off my brain, stopped thinking about falling and focused only on the next move. It was totally on the limit, for 5 or 6 moves in a row. The last moments rocking over onto the smeary slab were especially tense, an the elation I felt once I secured the finishing jug reminded me just how close to falling I had been.

Out of interest, why didn't you toprope it first?
For the last few years I have become more and more interested in climbing hard trad routes without top-rope practice. It's such a different challenge and interesting for many reasons, but more than anything it's both mentally and physically at another level of difficulty from top-roped ascents. This change was mostly to do with developing some fitness, but also from climbing in new areas with, how shall I say this, a more “forgiving” style of trad. On the gritstone, the techy strange moves are easy to fall off, and since most falls would put you on the floor, it's not a friendly place for going ground-up.

What are the biggest difficulties in ground-up ascents?
Apart from the obvious difficulty increase from not knowing the moves and tricks of the route, the big problem with going ground-up is placing the gear well and in the correct place. If the route is slab by, or with good rests, this is not too much of an issue, but with routes like INAP, it becomes a really big deal. When you arrive at the gear for the first time, you are usually more tired than expected after having climbed the lower section in an inefficient way. You are then less likely to place the gear well as you are forced to place it quickly, and also less able to asses the quality of the placement/gear. It's a fun, sometimes scary game. I really enjoyed the process of climbing this awesome and interesting route, and thanks to Mauro and Cristian for showing me the way…

You also climbed another route nearby
Yes, and this was actually the main goal of the visit as I thought my finger would be too painful for INAP. The project I chose lies just to the left of INAP and climbs the tall, pocket covered wall all the way to the top of the cliff. It's a very bouldery route, with hard moves split by good rests. The rock itself is sometimes a little sandy (normal for this area), but the quality of the moves more than makes up for it. The two main boulder problems are probably a little harder than those in INAP but you are far less pumped when you do them. The gear is also a lot easier to place, and whilst still not perfect you place it all from the good rests meaning you can really take your time to ensure it is placed perfectly.

How did the first ascent come about?
I first tried the line for a day the end of September, but a combination of my injury and poor and hot conditions meant I couldn’t even climb the crux moves. I left thinking it would be a really hard project, perhaps even harder than INAP, but when I returned in December in better shape, the crux move was suddenly makable, and the whole route possible. On the 14th of December I cleaned the rock, tried the moves and tested the protection, then that evening I climbed it from the ground, placing all the gear on lead. It's a fine line, probably somewhere in the region of E8 7a.

Last question, did you know some people believe you tried INAP on toprope first?
No, I wasn't aware! Thats a bit of a shock, and a little sad, but I guess that is the nature of the internet. Rumours spread like wildfire! I can officially tell you that is simply not the case. Perhaps somebody who saw me top roping in my new route a few days before confused this with Is Not Always Pasqua, they are rather close. Perhaps in hindsight I'll call my new route "Pazienza".