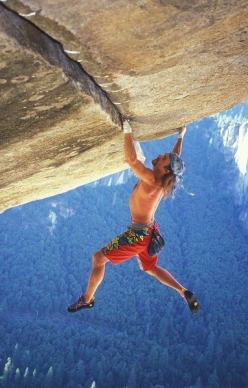 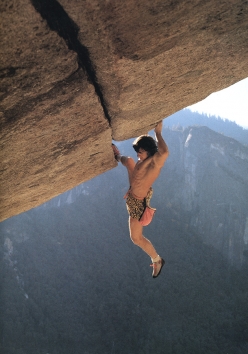 Wolfgang Güllich on the historic first solo ascent of Separate Reality in Yosemite in 1986. The photo was taken by Heinz Zak.
Photo by Heinz Zak

On 23 May Heinz Zak from Austria made the audacious second solo ascent of one of Yosemite valley’s finest routes, Separate Reality 5.11d.

On 23 May Heinz Zak made the audacious second solo ascent of one of Yosemite valley’s finest, and representative routes, Separate Reality. As many will remember, this 6m roof is considered to be an important milestone in climbing’s history: it was first ascended in 1977 by valley local Ron Kauk, and then soloed by Wolfgang Güllich in 1986. At the time, it was Zak who stood behind the camera to witness the ascent.

Although the crack at 5.11d is by modern standards no longer cutting edge, it has retained all of its original aura: brute force, 200m above the Merced River, will get you nowhere on the poor crux jams. Unsurprisingly, Zak’s is only the second solo ascent in the route’s 28 year history.

We phoned Heinz in Austria to find out more about this solo ascent and what, after almost 20 years, moved him into his personal, Separate Reality.

Heinz, where did this ascent come from?
I’ve dreamt about this solo ascent for many, many years. When Wolfgang Güllich soloed the route in 1986 it was completely out of my reach, not physically, but mentally. I was on good form and we climbed the route together, but I simply couldn’t imagine climbing it unroped. Since then I’ve climbed a series of hard sports and mountain routes solo, but none have been as exposed as this.

Separate Reality. A cult route?
Yes, Separate Reality is the perfect example of free climbing for me. We first saw a photo of Ray Jardine climbing it on the famous cover of Mountain magazine in 1979, and this impressed us so much that we decided to travel to Yosemite for the first time. It was there that we realised how apt the name really was: the crux just before the lip is very exposed, some 200 meters above the river, horizontal, and we couldn’t do a single move. It was like entering into a completely different world. Of course, other hard lines such as Midnight Lightening had been climbed, in those days without crash pads, but although we couldn’t climb this problem at least we could imagine how it could be done. Separate Reality at the time was a completely different entity.

And nowadays?
Nowadays it is no longer a different dimension, if climbed with a rope. But solo things change…

What about your solo ascent?
19 years have passed since Wolfgang’s solo ascent. In the meantime I’ve been back to the roof on various occasions, it literally drew me in, but I was never ready mentally. This year I thought I’d better do something great before I’m too old! I spent a month preparing, especially mentally and spiritually. I travelled to Yosemite specifically with this route in mind. Although I had no outside pressure, I felt pressure from the inside building up over all these years. Then suddenly, a quarter of an hour before climbing the roof, this burden disappeared completely. I climbed the route in a completely different state, unstressed, happy. Something happened that has never happened to me before. It was as if I had let go of everything around me, left my past behind me. On Separate Reality I climbed into a different dimension.

What is your relationship with risk and fear?
I enjoy living exciting moments, and these adventures remain indelibly in my memory. Nevertheless I'm careful about keeping risk to a minimum. Experience has taught me I think clearly in extreme situations. Overcoming fear is a personal challenge. It was only when I actually decided to climb "Separate Reality", 15 minutes before setting off, that all fear disappeared leaving room for a state of calm and happiness.

What would you recommend to someone who is captured by this free solo dream/magnificent obsession?
I would try to analyse and carefully weigh up this dream to see whether it is feasible. I don't believe in spontaneous, lightening ascents, to which one is driven by desire. But everyone is different and I believe you just have to feel right inside.