Flying above the Khumbu Icefall on Everest in 2012. The large serac can be seen clearly on the left.
Photo by Simone Moro 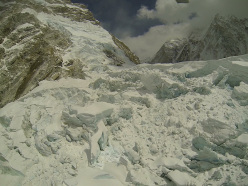 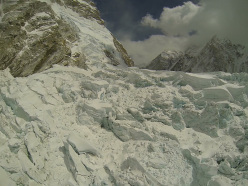 The large serac above the Icefall, taken in 2012.
Photo by Simone Moro 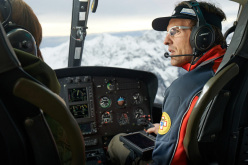 Interview with Simone Moro after the tragic avalanche on Everest on 18 April 2014 that caused the deaths of at least 13 Sherpa.

Simone, yesterday was a truly dark for Everest and Nepal.
Yes, what happened – and what's happening right as we speak - is a true tragedy that really hurts.

That surprised you?
No, I can't say it surprised me. It's left a deep mark, yes, but no, it didn't surprise me. What is striking is that in this case we're not talking about the usual 1 or 2 victims, those called the silent dead who often perish in the Khumbu Icefall perhaps because they don't clip into the ropes as they cross the crevasses, or because they get hit by smaller seracs. No, in this case we're talking about at least 13 victims, and this is only a provisional death toll after the first day.

Caused by the serac that broke off above the Icefall
Yes. It's worth remembering that at practically the same place a few years ago, in 2011, there was a similar avalanche that fortunately though was less deadly. At the time that avalanche sent a strong signal, so strong in fact that Russell Brice, the leader of one of the most important commercial expeditions, even decided to call off all his expeditions. At the time the decision was welcomed but he also received severe criticism.

Is it true that the route through the Icefall has changed compared to years ago?
I went on my first expedition to Everest in 1992 and then returned in 94 and 97, 2000 and 2001. I was back in 2006, 2010, 2012 and 2013 and I saw that compared to those earlier years, the route doesn't wind it's way up the centre of the Icefall, but much further to the left, closer to the West Face of Everest. This change came about because the route up the lefthand side can be fixed far more easily than a route via the endless series of seracs and crevasses in the middle of the Icefall. There are some plateaus and easier-angled slopes on the left, they even have names such as the Football Field and Popcorn and are obviously easier to climb. Instead of having to fix 50 ladders, only 20 or so are needed. You can climb faster but, as we've seen, you're far more exposed to the risk of the serac collapsing.

You know this serac well
It's absolutely enormous and it's clear that if it snaps off, a mass of ice that big will sweep away everything in its path for hundreds of metres. Having said that, the entire Icefall in general is dangerous, wherever you are. In all these years I've climbed through it more than 100 times, as fast as possible and with bated breath so as to be exposed to the dangers as little as possible.

The collapse took place at 6:30 in the morning
Seracs have always broken off, this is nothing new, and they break off at any time of the day. What is surprising though, and this is the terrible misfortune, is that instead of breaking off in February or autumn, or in the afternoon as usually happens, this time it ocurred in April and at 6:30 in the morning. At the start of the high season, when there is the greatest number of climbers and Sherpa who pass below the Southwest shoulder.

Could the death toll have been even worse?
Theoretically, yes. During the days when climbers make their summit bid there are 100, maybe 150 people who all set off together. All these climbers have to pass this point, often on the same day.

In addition to the sheer number of deaths, what has provided food for thought is that this disaster has affected only the Sherpa community
The season is about to begin, the Sherpa are preparing the route up the South Face with approximately 10,000m of rope. This seems to be standard practice nowadays, some sections are equipped with a fixed rope for climbing up and another for climbing down. So yes, the Sherpa had set off early in the morning with the gear, they were working hard and that's why Reinhold Messner defined this as a workplace accident. I agree with this definition, and even if I myself try to practice a different form of alpinism, I certainly don't want sit on a high chair and say who can and who can't climb Everest. A lot could change with common sense and adequate preparation over the years, with people gaining experience step by step and being obliged to have climbed other 8000ers first. Sherpas are not beasts of burden but guides on Everest who have found a job they do with enthusiasm and voluntarily.

Can you explain this better?
Everest is a really well-paid job for a Sherpa, in a month can earn up to 50 times the normal salary of other Nepalis. This doesn't mean we shouldn't regulate their job well, actually, we need to do everything we can and more to ensure their safety. I'm hurting for them, for their families, but we can't ignore the huge economic impact the mountains, not just Everest, have on the whole area and the entire country. Were everything to be closed to climbing would be like sending this region back to stoneage times. Obliging aspring Everest climbers to have ascended two other 8000ers before receiving permission for Everest would force the masses to spread out onto other mountains, would help the economies of the other valleys, would result in vital experience being gained and perhaps stimulate people's common sense and knowledge about what a high altitude climb really entails.

What happens now?
The search will continue for the missing Sherpa. Yesterday I was told that Everest resembled a war zone, everyone racing up and down from Base Camp, helicopters everywhere. Of course all efforts are currently focused on this and at present no one is allowed to climb the mountain. But the season will continue and even if some expeditions decide to return home, climbing on Mount Everest will recommence. Hopefully with far more awareness of what risks and dangers in the mountains really mean. Everyone always tells me 'Everest is nothing special, simple, a walk in the park.' But every year I've witnessed people lose their lives on that mountain and nobody, not even the Sherpa, reach the summit without putting in some considerable effort. The very same effort that was being made yesterday by those people, expert guides, within the Icefall. They were doing their job, exactly like those who in August climb up the Normal route on Mont Blanc or the Matterhorn. Guides and clients have existed for two hundred years and now though what is certainly needed is time to stop and think wisely, without being hypocritical, in an effort to render things as safe as possible for everyone. But this can't be obtained with blanket bans or rash, fundamentalist judgments.