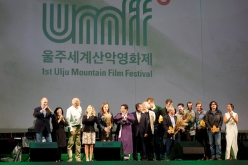 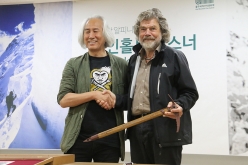 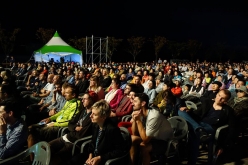 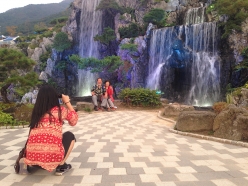 The waterfall at the Ulju Mountain Film Festival
Photo by Planetmountain.com

From September 30 to October 4, 2016, the first Uiju Mountain Film Festival took place in South Korea. Italian mountaineer Reinhold Messner was the Honorary guest, while 24 films took part in the competition. The Festival Grand Prize was awarded to Jurek by Paweł Wysoczański and the inclusion of our film "Chris Bonington - Life and climbs" provided a good reason for a trip (and a little adventure) to discover the meaning of the mountains in this great East Asian country.

Can a mountain film festival be experienced as an adventure? I know what you’re thinking, that this sounds like some advertising slogan. I assure you though that it’s not. Because what we experienced at the 1st Ulju mountain Film Festival in southeastern Korea’s Ulsan region wasn’t merely a trip to Eastern Asia, wit all it’s classic roller-coaster rides of excitements, wonders and misunderstandings. No, it was also - and above all - a small human adventure which held an almost… dramatic "surprise" in store right at the very end. And then, as the saying goes, everything is relative: an adventure can have a thousand personal facets, not necessarily all of which need to be extreme.

But let’s start at the very beginning, or almost so. Let's start at the Inaugural Ceremony. How can I explain our surprise when we reached the Festival buildings? Perhaps because, as good old Italians, we got there a little bit late. Perhaps because, by mistake, somehow they’d managed to forget about us. But when we reached the Uiju Mountain Film Festival entrance, gasping for breath, we stopped dead in our tracks, amazed and incredulous. Dozens of police, security officers and volunteers were controlling the entrance. There were those who directed the traffic towards the car parks. Others, the vast majority, who spun their space swords, pardon "lightsabers", through the air… In short, we’d never seen such a deployment of forces before. We we incredulous… what on earth where we there for?

Not to be won over, we quickly gathered ourselves and raced up the long road that led to main building, decorated with posters of all the films in the competition (except for ours, another mistake… this time ours completely). But there was no time to stop and think since we had to get on the green carpet. We were all totally bewildered. Opposite us was the enormous outdoor film screening area: a huge stage, huge screen and just as huge audience. There must have been a thousand people. They were all applauding. Was this a dream or was this real? Oh, I forgot to mention that it was raining, but no one seemed to notice. The fact of the matter is that, dazzled by spotlights and flashing cameras, we spontaneously thought that all this was right. That, finally, all the (hard) work of film directors and their immense passion is officially recognized. This doesn’t happen often, especially to us outdoor filmmakers. And so, for once, we savored the moment, happy and slightly embarrassed by all this attention.

The opening ceremony continued, just like the storm above us. The Festival was introduced. There was a highly competent international jury, presided by Bernadette McDonald (writer and founder of the Banff Centre for Mountain Culture), joined by Javier Barayazarra (director of the Bilbao Mendi Film Festival), Marco Preti (director and a historic figure of the new climbing movement that came to the forefront during the ’80’s), Kim Eunyoung (Professor of Cinema at the University of Chugye) and Cho Minsoo (actress and magnificent protagonist of Pietà, winner of the Golden Lion award at the Venice Film Festival). Reinhold Messner was there too, as the absolute star guest of the event. And to surprise, the audience had all been given a mask depicting the South Tyrolean’s face.We were told to put it on as soon as he took to the stage. We were all somewhat surprised and he, probably, was too. In the meantime the rain continued to fall, but this didn’t stop the show, the dancing, music and even the acting of Park Jaedong, the truly unique festival director. After the screening of Meru, the first day came to an end with absolutely superb food and drinks. And even the atmosphere that was immediately created amor the various film directors was superb. Perhaps because we were all a long way from home, or perhaps because we were all warming to the idea of this little adventure?In any case, the feeling one got is that all perceived they were experiencing something particular and great.

Talking about greatness. The next day we got a better idea of how big everything was. The Festival village was something we’d never seen before. They explained to us that until three years ago, nothing had been built and that everything around us had been created entirely and exclusively for the Mountain Film Festival. The area was gigantic. A modern, two-story building that houses a cinema, a press room, the reception for guests, an interview room, a museum and toilets. The building was placed in a sort of outdoor amphitheater split onto several levels: the base plateau housed the enormous outdoor screening area (used at the inaugural ceremony) dedicated to the main film screenings. This was flanked by food stands on either side. Slightly uphill were two huge marquees, another two outdoor cinemas that hosted 400-500 people each. There was also an artificial waterfall that sprung from the rocks and that, in the evening, lit up like a rainbow. And beyond this there was yet other surprise: the climbing wall. Absolutely immense! The Lead wall was huge, overhanging and ultra-modern. The Speed wall even had 4 pistes! The bouldering wall was never-ending. All were covered to protect them from the rain. Rarely have we seen anything like this, or perhaps there simply isn’t anything quite like it. Over 500 athletes competed in the Lead, Speed ​​and Boulder competitions throughout the festival. Not bad! Even for the spectators who, after every fall, every top, every whatever, showed their enthusiasm.

It comes as no surprise therefore that all screenings, including the crowded Messner conference, were completely sold out. The organization expected 50,000 visitors. We didn’t want to nit-pick and we didn’t count them. All we know is that there were hoards of people. A river in spate, of all ages: families, boys, girls, children, young and old. Many wore the trekking "uniform" and yielded the inevitable walking sticks. Many groups got up early in the morning and walked the forest paths surrounding the village. In short, during those festival days it seemed that Ulju with its hotels (which in truth sometimes went a bit beyond our own, albeit questionable, architectural taste) was the center of Korea. But perhaps this was just the impression we got. What is certain though is that the comparison with this world, and if you want with its idea of the mountains and mountaineering, proved inspiring. For example, the questions at "question time" at the end of the films always proved startling, offering angles and approaches we’d never imagined before. And this was perhaps the most interesting thing of all: seeing for ourselves how in this global and globalized world different points of view and different cultures, fortunately, still exist. Because diversity is always enriching.

This is also, in some respects, what the 24 films in the International Competition showed. 24 works that covered all, or nearly all facets of taking to the mountains, from mountaineering feats and exploration to the human and social aspects of experiencing the mountains. Perhaps due to this multitude of different experiences and ways of looking at things that the rapport between the film directors was so intense. Perhaps jet lag played it’s part, or simply the desire to say up until late, but the party, the discussion and exchange of ideas dragged on well into the night. One spoke, and joked, about everything. So much so that one night the topics, namely mountains, politics and international "disasters", were discussed by a Pakistani, a Belgian, a Spaniard, a Nepalese, an American, an Italian and an English… they certainly didn’t change the world, but it was interesting to listen to them, to feel their passion.

There would be so many other things to say. But by now this is far too long for "modern" standards. For the few who made it this far, what remains to be explained is that "almost drama" mentioned at the beginning. In brief, this happened as followed: on the last day, the day of our departure, a hurricane hit the region of Ulsan and the town of Ulju. The lucky guests (two) managed to leave in time and catch their flights to Seoul. Another group managed to "escape" but inevitably missed their flights; as a result they had a great visit to the amazing Seoul metropolis. The others, far less fortunate, found themselves cut off by the floods… an unexpected adventure that everyone, including the organizers, would have done without. But in the end what remains is this overall experience (apart from the hurricane) that was absolutely unforgettable. Yes, this trip was really nice. And for our part we can only wish the Ulju Mountain Film Festival to become old and successful. Thank you South Korea!