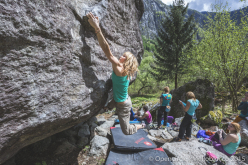 Pre-registration is now online for Melloblocco 2016, the biggest bouldering and climbing meeting in the world that will be held in Val di Mello - Val Masino, Italy, from 5 - 8 May 2016.

For some, the fact that another year has just gone by is marked by the arrival of Christmas, New Year, carnivals or what not. For others, it’s a new Melloblocco that proves 365 days have just flown by, in the blink of an eye, at breakneck speed. So it’s time to pause briefly, mark the dates from 5 - 8 May and think about the 13th edition of Melloblocco, the biggest bouldering and climbing meeting in the world that takes place annually high up in Italy's Val di Mello and Val Masino.

Truth be told, no one really knows what to expect below those snow-capped peaks. There will most certainly be lost of bouldering and climbing up the infinite valley boulders. And there will undoubtedly be countless crashpads dotted across the alpine meadows, next to the fast-flowing river and deep in the forest. Above all, they’ll be lots of friends and familiar faces, from all across Italy and the rest of the world. They’ll be meetings and encounters, some organised in advance, most completely casual, of climbers of all ages who've been taking part in this beautiful vertical ritual for years. Perhaps the sun will shine.. knowing the valley, they’ll also be a bit of rain. But knowing the Melloblockers, this certainly won’t stop play. People will get lost in forest with that map non-map, they’ll be evening shows, films and parties. In short, they’ll be that inexplicable "oragnised chaos" which, ever since 2004, has rendered Melloblocco absolutely unique.

As every year, to be a part of this beautiful climbing celebration we recommend you pre-register now via the official website www.melloblocco.it. This pre-registration is free of charge, non-binding and helps the organisers prepare the event. Furthermore, you’ll ensure you get a legendary T-shirt and goody bag that need to be reserved in advance.