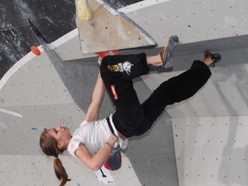 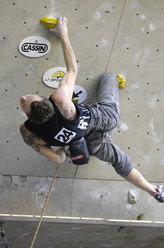 On 28/06 Johanna Ernst from Austria and Tomás Mrázek from the Czech Republic won the first stage of the World Cup Lead 2008 in Qinghai, China.

The World Cup Lead 2008 kicked off to a surprising start in China's Qinghai last weekend with Austria producing its nth rising star, this time in the form of Johanna Ernst. The 15 year old (who a few weeks ago made headline news with her 8a+ on-sight at the Schleierwasserfall) climbed perfectly, leaving no space for critics or  adversaries by topping out on all 3 routes to make her predestined debut into the World Cup circuit.

But this wasn't the only surprise in Asia: the Austrian flag flew proudly for 17 year old Jakob Schubert who took men's silver after having been the only athlete to stand up the "veteran" Tomás Mrázek. The 26 year old lived up to his usual Terminator reputation to finish first, and he was joined in the podium celebrations with Sachi Anma from Japan who, for the record, is a mere 18... Two other "young but old" names, 24 year old Natalija Gros from Slovenia and 18 year old Charlotte Durif from France, took women's silver and bronze respectively.

Many of the world's top climbers failed to live up to expectations in this first stage, above all World Champion Angela Eiter who finished 10th. The Austrian failed to qualify for the Final after (incredibly) climbing slower than the maximum time allowed. Similar story for reigning World Champion Ramón Julian Puigblanque who finished 7th just ahead of another repeat finalist, Jorg Verhoeven from Holland: both climbers had difficulties in clipping a quickdraw at the start of the Semifinal. 2007 World Cup winner Patxi Usobiaga made short work of this but in the end had to make do with 4th overall.

20 year old Manuel Romani from France placed fifth while 19 year old Magnus Midtboe from Norway finished 6th to complete the men's line up. In the women's final 19 year old Yana Chereshneva from Russia held off the group of "old climbers" headed by 27 year old Alexandra Eyer from Switzerland, 25 year old Barbara Bacher from Austria and evergreen Muriel Sarkany who, at 33 years of age, has a tremendous first class list of victories.

Talking about Speed;  interest is growing in what many (correctly) define as being the most television friendly of the three vertical disciplines. It comes as no surprise therefore that the competition was aired on national TV and that the Qinghai stage was won by two home athletes: world Speed champion Qixin Zhong and 24 year old Chun-Hua Li. Both climbers literally ripped the world record to shreds, Li requiring a mere 10,58 seconds, while Zhong needed an impossible 7,35 seconds. Another detail worth mentioning: the top four places in both the men's and women's event were taken by Chinese athletes. The question that arises is: is this a historic boom moment for what has long been considered the Cinderella of climbing competitions?

What is clear is that Qinghai marked only the start to 2008, there are another 6 stages to the traditional final in Kranj which signals the end to the world tour in November. It must also be said that the Chinese stage is always somewhat special, no Italian athlete took part for example and last year’s World Cup winner Maja Vidmar was conspicuous for her absence. But one thing is certain: the competitions will have to heed the young rising stars who hit the international limelight at regular intervals and which, invariably, stem fro Austria. Bouldering and Lead seem to be in Austria's hands!

The second stage of the Climbing World Cup Lead will take place in Chamonix, France, on 12 and 13 July 2008.