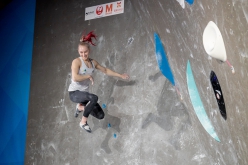 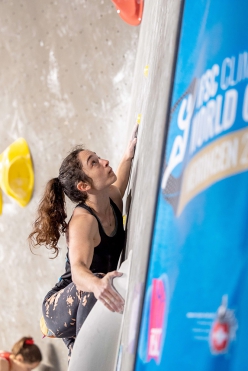 The first stage of the Boulder World Cup started yesterday at Meiringen, Switzerland. The women's Semifinals and Finals today, the men's on Sunday.

As per tradition, the season opener of the International Federation of Sport Climbing (IFSC) Boulder World Cup 2022 began yesterday morning at Meiringen in Switzerland. This post-Olympic season will certainly prove interesting and confirm the generational shirt after two of this sport’s greatest, Shauna Coxsey and Akiyo Noguchi, retired from competitions following the Tokyo Olympics.

Yesterday morning almost 200 athletes took to the mats in the debut as they battled for the top 20 spots in the Semifinal. Only two female athletes sent all 5 boulders, namely Slovenian ace Janja Garnbret and 20-year-old Ayala Kerem from Israel who in doing so managed to beat far more seasoned competitors such as Natalia Grossman, Brooke Raboutou, Orianna Bertone and Fanny Gibert. In the men's event only Slovenia’s Zan Lovenjak Sudar sent all five problems, while Tomoa Narasaki dominated his group. It’s worth noting that 6 Japanese athletes took the top 20 slots in the men’s event… will this be the Leitmotiv of this season?

The competition continues today at 11:00 with the women's semifinal, and at 18:00 with their final, while the men's semifinal takes place at 11:00 on Sunday, followed by the final at 16:00. It’s worth remembering that in many countries - though not all - the competition will no longer be broadcast in live streaming free of charge on the IFSC youtube channel, but on Discovery plus and it’s affiliated networks. For all details about how to watch the even, refer to the IFSC website.