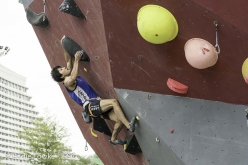 Xiamen in China is currently hosting the penultimate stage of the Speed and Lead World Cup 2017. The finals take place at 12:50 and are transmitted in live streaming.

Xiamen in Southern China is currently hosting the penultimate stage of the Speed and Lead World Cup 2017. The competitions have been marked by the extremely difficult weather conditions that forced the organisers first to reschedule the semifinals, and then to cancel the women’s Semis altogether, meaning that all 13 women who topped out in both Qualification routes advanced to today’s finals. The men’s semis were interrupted by rain but nevertheless were completed; the best 8 include a flurry of world-class boulderers, and also Italy’s Stefano Ghisolfi who has reopened the title race, especially in view of the fact that current leader Romain Desgranges surprisingly didn’t make the cut for the finals.