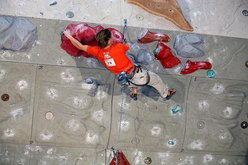 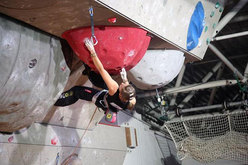 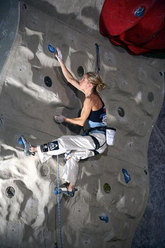 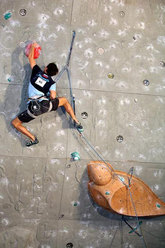 The sixth and final stage of the Lead World Cup 2008 took place in Slovenia's Kranj last weekend and was won by Johanna Ernst from Austria, ahead of Maja Vidmar and Akiyo Noguchi. Klemen Becan from Slovenia won the men's event, ahead of Jorg Verhoeven and Patxi Usobiaga. Ernst and Verhoeven win the overall World Cup 2008.

One thing was practically certain before the final in Kranj: young Johanna Ernst would have celebrated her first victory in the World Cup Lead. And this is exactly how things turned out, with the 16 year old Austrian winning her third event this season, crowning off a fairy tale senior debut. Victory at the European Championship in Paris, victory at the rock Master in Arco and victory in the Lead World Cup, via victory in her Youth Category A... Ernst simply could not have done better!

Some might say that all of this happened in the year in which Angela Eiter, the Austrian queen of climbing, was forced to miss out the entire second half of the season due to injury, placing 12th overall. And it also happened in the year in which last year's winner of the World Cup Maja Vidmar from Slovenia launched her comeback 2 competitions late. But there can be no doubts: star Johanna Ernst is bound to shine for a long time coming. Just as the battle with Maja Vidmar and also Angela Eiter when she returns to fighting form, will continue.

Ernst's overbearing victory in Kranj marks a truly impressive supremacy: she was the only athlete to top out on all three routes. Furthermore, she achieved this competing away, as this is the home crowd of Maja Vidmar. For the time being female climbing is being dominated by Ernst and her power. All others need to analayse and adapt. Starting from Vidmar (excellent second in both Kranj and the Cup), via Mina Markovic (another top Slovenian climber who placed 3rd overall), Akiyo Noguchi from Japan (3rd in Kranj, 5th in the Cup and winner of the Combined Lead, Boulder & Speed) and Caroline Ciavaldini from France (4th overall). Either they work hard to contrast the power and stamina of "rocket" Johanna Ernst, or they will continue to bow their heads.

While the outcome in the women's event looked set, the men's game was far more uncertain. Ramón Julian Puigblanque, Jorg Verhoeven and Tomás Mrazek were all in the running in this final sprint for gold, separated by a mere 32 points. In the end the Dutchman got the better of his rivals, placing second in Kranj and thereby winning the Cup. Mrázek placed 4th and failed to double his 2004 takings, and this missed occasion was shared by Ramón Julian Puigblanque who produced a performance best forgotten about: eliminated in the Semifinal, the reigning World Champion placed 15th in Kranj and 3rd overall to lose, once again, that title which is missing in his list of honours.

As mentioned previously, the men's event was won by 26 year old Klemen Becan from Slovenia. This athlete has demonstrated great progress of late, and his best performance to date netted 5th overall in 2008.  Becan beat Verhoeven by the slightest of margins, holding a hold which the Dutchman has only managed to touch. The other Lead Champion Patxi Usobiaga finished 3rd in Kranj and 4th in the World Cup, climbing considerably higher than both Mrazek and Jakob Schubert from Austria. The remaining finalists finished in the following order: Cédric Lachat (CH), Flavien Guerimand (FRA) and Sachi Anma (JPN).

What is worth noting, once again, is how everything was resolved in the space of just a few millimetres. This proves just how level the men are: no one managed to win more than one stage this season. The six 2008 podiums went to Mrázek (Qinghai), Verhoeven (Chamonix), Usobiaga (Bern), Puigblanque (Puurs) and David Lama (Imst) in his ony Lead competition this season which netted him victory in the Combined Lead, Boulder & Speed. Verhoeven was truly superb in 2008, finally clinching the Trophy which in the last 4 years he has always been close to winning. Many will remember for example his 2nd place in 2005 just behind Italian Falvio Crespi.

Talking about Crespi and Italy. With Crespi's absence due to injury and Luca Zardini's retirement, the Italian squad practically never took part in 2008, bar the exception of Jenny Lavarda who finished 25th overall. It's clear that Lead is going through a difficult stage, and it's equally clear the the future lies in the youth movement. But it's equally clear that this latest period was marked by Giovanni Cantamessa's serious road accident; the team manager had been the driving force behind the national team. And it's for this reason that, with eyes to the future, our thoughts and, we're certain, also those of all other climbers, go to Giovanni.