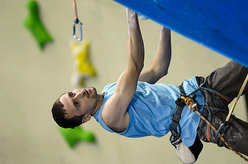 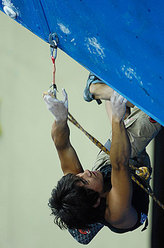 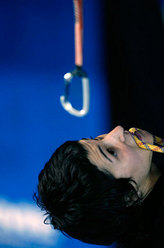 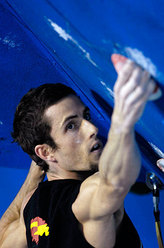 All the best athletes have qualified for Saturday's Semifinal in the Lead World Championship 2007 in Aviles, Spain.

If this was the Vuelta one could say that today was a transfer stage, one drenched in sun and kissed by the ocean wind. But since today was the second Qualification day of the Lead World Championship 2007, we should say that today the routes were more pedlable than yesterday's. Or that the doors to the tops were (perhaps purposefully) left wide open. More so in the men's than in the women's route which, even though slightly easier than yesterday, was by no means a walkover. The result: nothing new compared to yesterday's first results - all the best have qualified to the second round. Well done - today we witnessed the "power" of world climbing with a 9 hour non-stop competition!

The best peddled, sorry climbed, in abundance in Spain's Aviles today. And although not everyone topped out, many had a good chance of climbing high. Which resulted in 35 tops in the men's competition (compared to 13 yesterday) and 14 in the women's competition (compared to 10). All those who topped out on Tuesday did so again today, with the exception of the 16 year old Spanish talent Eric Lopez Mateos and the 16 year old French talent Charlotte DurifÂ  who both fell close to the top.

So after a second competition day 11 male athletes qualify with full marks, ie two tops in two routes. They simply couldn't have done any better! Nestled within this small "impeccable" group are Flavio Crespi (almost a walk in the park) and “lion” Luca Canon Zardini (a missile, as determined as never before i. The two italians are in excellent company, and they share the top with high calibre athletes such as the Spaniards Ramon Julian Puigblanque (winner of the last 3 Rock Masters) and Patxi Usobiaga, the defendingÂ  World Champion Tomas Mrazek (Cze) and the "veterans" Christian Bindhammer (Ger) and Sylvain Millet (Fra). They are joined by important outsiders such as Valeriy Kryukov (Ukr), Sang-Won Son (Kor), Sachi Anma (Jpn) and the (excellent!) Magnus Midtboe (No).

But as all know things will change during Saturday's Semifinal. So it's worth having a look at the other qualifiers definitely in with a chance: David Lama (Aut), CÃ©dric Lachat (Sui) and the leader of the World Cup Lead 2007 Jorg Verhoven (Ndl).they are joined by Alexandre Chabot who today literally waltzed to the chain. Previsoulsy mentioned Eric Lopez Mateos (Esp) will be there, as will the Maxim Petrenko, Klemen Becan (Slo), Fabien Dugit and MichaÃ«l Fuselier (Fra), Ja-Ha Kim (Kor), Ivaylo Krastev (Bul), Tsukuru Hori and Tsukuru Hori (Jpn), Casper Ten Sijthoff (Ned), Martin Jaggi (Sui) and JÃ¼rgen Reis (Aut). Lucas Preti, the third Italian competing, finished 49th and he will continue tomorrow with the Bouldering competition in the hope of winning the combined Lead, Boulder and Speed.

Naturally the women's comp was pretty much clockwork. Angela Eiter "logically" topped out today aswell, together with American Emily Harrington and Irati Anda from the Basque country: much like during the last Rock Master, they graced the scene with stunning ease. They were joined by Muriel Sarkany, determined more than ever before to win what can be won. Today's other "double bonus" athletes were Alexandra Eyer (Sui), Yuka Kobayashi (Jpn), Caroline Ciavaldini (Fra), Mina Markovic (Slo) and Ja-In Kim (Kor).

The remaining female qualifiers include Maja Vidmar from Slovenia (in with a good chance of winning), Charlotte Durif (Fra) who failed to repeat yesterday's top, the AustriansÂ  Barbara Bacher and Katharina Saurwein, Natalija Gros from Slovenia and Akiyo Noguchi from Japan. Sandrine Levet incredibly failed to find the way to the finishing hold both yesterday and today but qualified nevertheless, and she will battle against Evgenia Malamid, Yana Chereshneva, Ljubov Shagina and Ksenia Alexeeva, Li-Ping Huang, Nina Caprez, Christina Schmid, Lucka Franko, Jenny Lavarda and ChloÃ© Graftiaux.