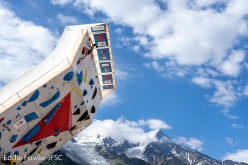 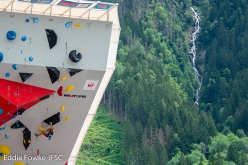 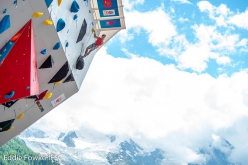 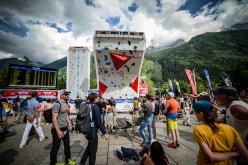 Live streaming today from Chamonix, France, from the second stage of the Lead World Cup 2019. At 10 am the semi-finals, at 20.30 pm the finals. The Speed World Cup stage was won by YiLing Song and Alfian Muhammad.

There is no bigger venue on the World Cup circuit than Chamonix during France's Fête Nationale, its Bastille Day national holiday. Yesterday the qualifiers saw an almost record number of competitors vying for the Semifinals: 103 women and 111 men.

In the women’s event Janja Garnbret and Chaehyun Seo topped out on both qualifiers with Ai Mori hot on their heels, indicating an interesting change occurring in the women’s event with the two 15 year olds beginning to be threaten the Slovenian’s dominance. In the men’s qualifiers Adam Ondra bounced back after injury to clinch the only two tops, placing provisional first ahead of Alexander Megos and Romain Desgranges who, after his "faux départ" in Villars last week, secured a place in the top 26 in front of his home crowd. Last night's Speed World Cup stage was won by YiLing Song and Alfian Muhammad.

Live streaming commences this morning at 10:00 with the semi-finals, while the finals go live at 20.30.