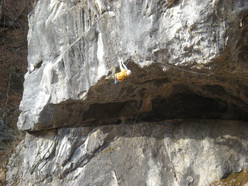 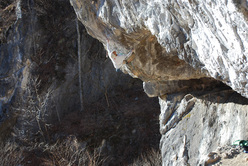 Yuji Hirayama frees The Fifth Element 9a at Chichibu, Japan

40 year old Yuji Hirayama has amde the first ascent of The Fifth Element 9a at Chichibu, Japan.

Just a few days ago Yuji Hirayama managed to make the first ascent of "The Fifth Element" at Chichibu, Japan. The route crosses an enormous 15m roof before finishing with a hard boulder crux, which Yuji believes may well be 9a.

As many know, Yuji is one of the most accredited climbers of all times, with ascents which range from 9a+ at the crag to impressive performances on El Capitan (read near Salthè in 1997), via wins in the World Cup Lead and, above all perhaps, the world's first 8c on-sight. At 40 years of age the Japanese climber shows no signs of slowing down, on the contrary, and as usual he has shared some of his vertical wisdom with us.

Yuji, you're 40 years old and stronger than ever. What is this due to?
I feel as if I'm constantly improving. I think my hardest routes are still in the future, perhaps in the next several years. I really believe in dreams. If you have a goal, you'll manage to maintain a good level for all your life. And the most important factor to be good at what you're doing, you must enjoy it!

Have you improved thanks to an evolution in your training?
I always give my best when I train... But I don't have much time compared to before, so my volume of training is much less than previously. To be honest I don't really know how many years I'll continue improving. Maybe when I'm over 50? Ha, why not?

So your two 8c on-sights gave you more satisfaction?
Yeah... But you know, a 9a first ascent gives you a very different sort of satisfaction, and so much of this too!

When you were on the Nose last year you fell and almost seriously injured yourself. What did that episode teach you?
To always remain concentrated and focussed... this is the first and most important thing to avoid making mistakes.