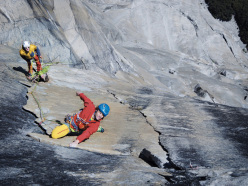 The video of Roger Schäli and David Hefti and their repeat of Golden Gate on El Capitan, Yosemite, USA.

While the ascent dates back to 18 and 19 May, the video is now out of the repeat of Golden Gate on El Capitan by the Swissmen Roger Schäli and David Hefti. Freed by Alexander Huber and Thomas Huber in 2000 and first repeated in 2003 by Japan's Yuji Hirayama, these 41 pitches up to 5.13b remain an important testpiece that opens the gates to the bigger difficulties on Yosemite's big walls.