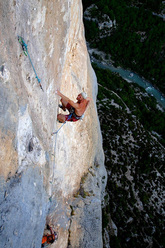 In summer 2009 Toni Lamprecht, Uli Strunz and Benno Wagner carried out the first ascent of the multi-pitch "Le Vieux et la mer" 8b in the Verdon Gorge, France.

The Verdon Gorge in France has always proven to be an irresistible draw for climbers worldwide and although this sea of limestone is no longer the testing ground it once was for the vertical elite, every now and then it still offers sparkling new gems to those who know how to look. The latest jewel to be unearthed is "Le Vieux et la mer", a seven pitch route established by the Germans Toni Lamprecht, Uli Strunz and Benno Wagner in summer 2008 and freed in August 2009 on the spectacular pillar in the Ula sector, close to the famous Pichenibule.

After bouldering out all the moves Lamprecht managed to free all the single pitches and stated "Even though we didn't manage a one-day free ascent of "Le Vieux et le mer" (6b, 7a+, 8b, 8a, 6a, 7c+, 7a), the route is nevertheless the catch of my life in this magic gorge." There is still plenty of new terrain in the Gorge and we're certain that one day these smooth walls will once again return to favour.