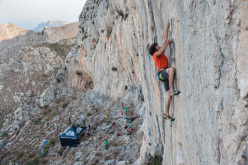 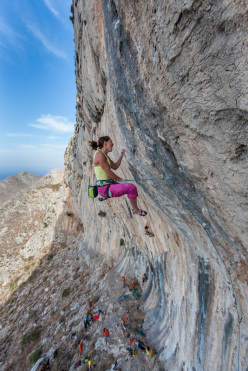 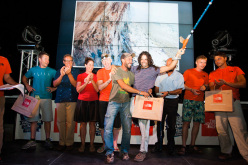 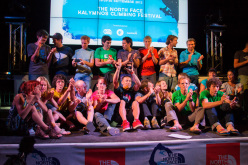 Sun, sea, great climbing and partying. These are the ingredients of the first The North Face Kalymnos Climbing Festival which took place on the Greek island from 26 - 30 September 2012.

I'm probably biased, but stating that the first The North Face Kalymnos Climbing Festival was a huge success is certainly somewhat of an understatement. The four day event, from Thursday to Sunday last, proved a complete winner with its simple formula which put the pure joy of climbing with friends in the foreground, against the marvellous backdrop of the fabulous Kalymnian cliffs, the sun and irresistible sea .
The festival was open to everyone and more than 350 climbers travelled to Greece to answer this call. Many came for the first time ever to the sponge divers island and they were joined by 19 of the world's best, invited to take part in the PROject Competition, the special event within the meeting itself which gave the Pro climbers the chance to climb a series of new routes bolted specifically for the festival at a "secret crag" by Italy's Simone Moro and Jacopo Larcher.
At times being a pro has its disadvantages and here on Kalymnos this meant getting up early, read 5:30 am, to make the most of the morning shade and stand a chance on these slightly overhanging, highly technical routes. Everyone negotiated the steep nigh 40 minute approach in first light, except for Russia's Anna Mikushkina who astounded her colleagues by popping round the last hairpin bend long after midday, just as everyone was heading back down for a highly deserved quick dip in the sea... evidently her recent trip to Thailand had served her well for Greece's basking heat!
For three days, no three mornings, the PRO climbers battled it out on 4 routes for the men and 4 for the women and despite a total of 10,000 euro being up for grabs it's worth underling the rare and surprising, remarkably relaxed and festive atmosphere they managed to create as they cheered each other on with genuine sportsmanship. It was almost as if they wanted everyone to clip the final anchors and this doesn't happen often, so congratulations to all! This atmosphere of fun and fairplay was completely in line with the underlying theme of the festival and this simple joy could be felt throughout the event, especially while all other registered climbers fought their way up the 500+ marathon routes littered across 17 crags which included Grande Grotta, Afternoon, Spartacus, Panorama, Poets... Yes, because which the pros were busying away at "their" crag (which as Moro explained has now been named after the mountain), the 350 marathon climbers climbed on Friday and Saturday on whichever routes tickled their fancy. They then just ticked the route name a number of attempts on a sheet of paper which was handed in at the end of the day at the beautiful Elene Village Base Camp, to create an official score. To make things more interesting there were two categories, Open (3a - 7a) and Big (7a+ - 8a) and obviously they could choose to team up in male, female or mixed categories. In short, although this was a comp, it was completely informal and based on mutual trust. And, as it would turn out, a winner for everyone!

Andrea, Simone, James, Caro and Nico...
Talking about everyone. After the climbing, the swim and the Greek salads, and as the sun disappeared behind the island of Telendos, Thursday's climbers flocked to the Base Camp to watch the opening ceremony which began with some great music put of by the excellent DJ Filippo Colombo and the official thanks to all those who made this event so great. Obviously Andrea di Bari was up on stage - he who first discovered the island, and who expressed his amazement for the island's success. Next to him, the mayor, the tourism officer and president of the Greek alpine Club was, obviously, the driving force behind the event Simone Moro who explained with his usual enthusiasm how his dream had materialised. He mentioned another key player, The North Face's Tiziana di Gioia who received an honorary citizenship together with Simone and Andrea. This enormous, surprise present was made by the mayor who with his precise and heartfelt words - translated sweetly by Christos Boukoros - transmitted the island's love for climbing. After this touching moment the time came for the highlight of the evening: the quick presentation of all the athletes, followed by an immense cheer as each jumped up on stage. And then off everyone went for some beers at the bar!
If Thursday was the "starter", Friday's main course promised to be truly special as the time had come for the Speakers Series, a unique moment to find out more about three of those exceptional athletes invited to this event. As the moon appeared above Grande Grotta the light sea breeze transported the words of James Pearson and Caroline Ciavaldini, two climbers with radically different backgrounds who have found their common path on some of the world's wildest and most radical rock faces. For while Pearson was born in England and boasts an incredibly strong bouldering and trad curriculum, (read the world's first 8B boulder flash, fast repeats of cutting-edge trad lines such as Equilibrium and Muy Caliente, first ascents of The Promise and The Walk of Life to name but a few), Caroline Ciavaldini left her home Reunion Island aged 16 to join the exclusive French competition squad. Her track record is impressive to say the least, with participation in 65 World Cup events, innumerable podium places (including 13 times silver!) a win in Chamonix last year and redpoints up to 8c+. Opposites attract as the saying goes and this couldn't be more true here, as the two have fed off each others' talents to become far more complete: Caro has now climbed E8 trad and James has upped his sports climbing game to redpoint 9a. Importantly though, the two have travel extensively and Friday evening was dedicated to their latest adventure, a trip with America's Daniel Woods and Japanese legend Yuji Hirayama to discover the granite secrets of Mt Kinabalu, Malaysia's highest mountain. During the four-week trip Yuji managed to finally send his 2-year project: a 9a multi-pitch which he ranks as one of his 5 most important climbs. The others busied away at bolting and freeing outstanding quality climbs at altitude (noteworthy was James' explanation of his battle on a 6c+ during his first day at 4000m), and as the evening unfolded and Caro and James shared their experiences it became clear that this had been much more than a simple climbing trip. So much so that Yuji's climb gained added significance, because it was his way of providing a message of hope to his people after Japan's terrible Fukushima disaster. Yuji came up on stage to an immense round of applause, followed immediately by reverent silence as he explained his fears and thoughts during those days which left an indelible mark in everyone. A truly touching moment which we won't forget about it a hurry!
And we certainly won't forget about the next man on stage: Nico Favresse, the man who perhaps more than anyone else exemplifies the simple pleasure of climbing free, fast and clean, up the world's biggest, most remote walls. The Belgian ace kicked off his show playing his hallmark guitalele (no, not a mandolin as he explained but a mini, six-stringed acoustic guitar) while his girlfriend Argyro Papathanasiou delighted everyone which a traditional Greek song. This genuine moment given to us by Argyro (the first Greek woman to send 8a) led directly to Nico's latest enterprise, a new route forged with Sean Villanueva, Stephane Hanssens and Jean-Louis Wertz up Amuri Tepui in Venezuela. Nico talked, played, showed photos and videos to bring the jungle climb to life with all their fears, doubts and joys. The spectators were understandably enthused and perhaps one or two will now be motivated to free their projects in the dark powered by a headtorch, just as Nico had done!

Saturday night, the traditional dancing, the awards and the party
There must have been nigh on 500 people on Saturday night for the final festival evening. After yet another beautiful climbing day (accompanied by Aris Theodoropoulos's indispensable guidebook, blue skies, not a cloud in sight and 27°C) they came to the Base Camp for the award's celebration and party. And also for the Greek music and dance, to discover yet another important tradition which bonds the Greeks to their land and their roots. Climbers mingled with the local islanders of all ages and as the first notes of the Bouzouki drifted out into the magical night air the atmosphere was fever-pitch. Kalymnian dancers dressed in traditional costumes danced proudly into a powerful, enthralling trance which some failed to resist, including Yuji Hirayama, Nico Favresse and Iker Pou... yes, people wanted to party! Syrtaki was followed by the local sponge diver's dance, the terribly beautiful re-enactment of divers getting the bends on their way back up to the water surface, and this touching moment paved the way for the award's ceremony. Starting with the winners of the marathon Open and Big categories; as these were called up on stage to collect their prizes they were greeted with a huge, genuine round of applause which underlined how much everyone felt part of the climbing family. The biggest cheers probably went to Spain's Urko Carmona, recently crowned Paraclimbing World Champion and winner of the Open Big category together with Sergio Sola Atares. How Urko climbs and even gets up those steep little paths defies belief but has the advantage - he explained with a wink - that he's already warmed up when he gets there! What an inspiration to all!
Urko was followed by the awards for the PROject competition, by those climbers who had been successful on the 3 routes (the 4th route, in both the male and female categories, remained a project...) Each athlete received a huge cheer and after the ritual group photos and thanks (once again by the mayor who, that morning, had surprised us by hiking all the way up to the competition crag to witness the event for himself), another DJ kicked off what would turn out to be an unforgettable party. But this, like the secret of Kalymnos' success, is another story...