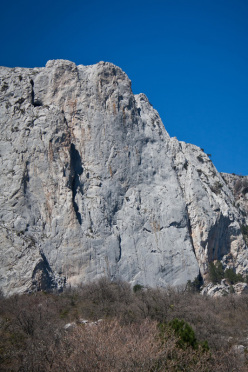 Mount Morcheka in the Crimea, Ukraine
Photo by Sergey Nefedov 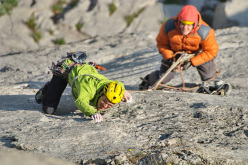 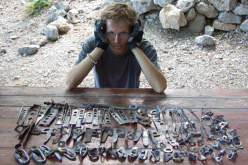 Sergey Nefedov and partners have freed a number of old routes up Mount Morcheka in the Crimea mountain range in the Ukraine.

Mount Morcheka is as smooth as limestone can get. Located in Ukraine's famous climbing area Crimea, this pristine rock face has a long climbing history with numerous aid routes protected by a mix of trad gear and bolts still awaiting their first free ascent. Russian climber Sergey Nefedov has invested much time in this area and after having freed Machombo (7c+, 335m) in 2010 together with his brother Andrey, during the month of May Russian climber Sergey Nefedov freed a series of routes nearby which despite not being cutting-edge in terms of difficulty, are certainly as beautiful as can get.

Mount Morcheka is the most interesting place for trad climbs in the Crimea. The 300m high limestone face is a vertical slab, polished by thousands of years of water erosion. Most people who look at climbs are intimidated by its smoothness, but in truth the perfect rock hides small crimps and holes which aren’t visible from the ground. Furthermore, Morcheka contains incredible gully-tunnels formed by the flowing rain water. These tunnels vary in size from finger width to 1.5 metres in diameter and are pretty unique and unlike most limestone cracks since they have rounded edges and require much getting used to. In May I freed some classic and popular lines with different partners:

BG: FA 1994 Bardin – Ganich. 5 pitches (6b, 7a, 7a, 6b+, 6b + 150m grade 5 simul climbing). BG is now the most overhanging trad free-climb in Crimea, a-typical for Morcheka, with a crack which overhangs 15 meters in its 70-meters crux section. I managed the on-sight but was very close to fall andI didn't fall thanks to my Yosemite valley experience. We usde 14 Camalots to # 5 and needed 4 hours 20 minutes.

Ded 83. FA 1983 Samoded. A variant of the route Orel, with three different starting pitches graded 6c+, 6c+, 6b. Awesome gully-tunnel as described above.


INFO
How to get there
The starting point for Mount Morcheka is Simferopol, the capital of Crimea. From here continue by car or bus to Yalta (83 km, 1.5 hrs) and from Yalta continue to Parkovoe where, in good weather, you can already see the Morcheka rock face. From here walk on foot for 1.5 hrs along the overgrown path to reach the base of the wall where you can camp.
Alternative (bonus): take the longest trolleybus in the world, stretching 96 km or from Simferopol to Yalta. This takes 3 hours, but costs only 2$.

Best time of year
Most of Crimea has a temperate continental climate, except for the south coast which experiences a humid subtropical climate due to warm influences from the Black Sea. The Crimean mountains act as a barrier between the narrow subtropical zone and the highlands further to the north. Summers can be hot (28°C July average) and winters are cold (-0.3°C January average), but of course there are exceptions and sometimes you can climb without a T-shirt even in winer. The best climbing season is April – mid June and mid September to the end of October.

Notes
At present there is no English guidebook to this area. Foreigners wishing to climb here may contact Nefedov directly via sergeynefedov.rapt@gmail.com