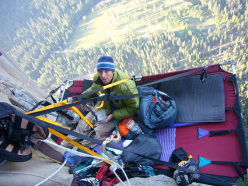 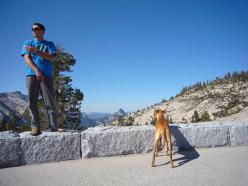 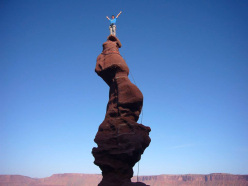 Sean Leary on the top of the Ancients Art tower, Moab
Photo by Martina Cufar

On 13 March the American climber Sean Leary died during a BASE jump accident in Utah, USA

The American climbing community is in grief: the news broke three days ago that 38-year-old Sean "Stanley" Leary died during a BASE jump in Utah, USA. Recognised as a expert BASE jumper , Leary was also considered one of the strongest climbers of his generation in Yosemite where, amongst other climbs, he achieved numerous remarkable ascents such as The Nose, Salathé Wall and Lurking Fear in a single day in 2010 together with Alex Honnold and, later that same year, the Speed record up The Nose together with Dean Potter. Leary's climbing wasn't however limited to these beautiful granite faces that had in many ways become his second home, in fact he had also ascended numerous other big walls around the world, establishing routes such as The Yopo Wall on Cerro Autana in Venezuela and the NE Ridge of Ulvetanna Peak in the Antarctic. Despite these great ascents, Leary continued to keep a low profile and it is for this reason that we thank his friend Chris McNamara for having kindly shared these thoughts, published originally on supertopo.

Sean Leary was one my all-time favorite adventure partners. Not only was it fun to climb El Cap or jump off a bridge with him, but we could talk about everything from veggie gardening to eastern philosophy. Climbing El Cap was fun, as was doing Sean’s first BASE jump off the Potato Bridge. But I remember best the long conversations on the descents from El Cap or over breakfast before a big day in the mountains. We both shared a vision/philosophy that all these big adventures were not about the photos and videos that came from them (though that was a fun side benefit). It was much more about finding and staying on an elusive path of constant discovery and growth. Sometimes that was about climbing El Cap faster or finding the last great undone BASE jumps in the U.S. But more often it was about books we were reading, how he could get solar on his house in El Portal, or how to have a better backyard veggie garden.

I first really got to know Sean on New Year’s Eve 2000. The world was coming to an end because of some bad computer programming, or so a lot of people thought. We were out in the desert near Bishop around a big campfire. Everyone was on way too many drugs; Sean and I were on even more. Everyone else eventually fell asleep so it was just the two of us left to watch the first sunrise of the millennium. I can’t remember if we said much — our brains were pretty much Jello at that point. I just remember thinking that we were two people on the same path: using mountains, adventures (and maybe a little acid) to tap into the most powerful and meaningful experiences we could find.

I saw Sean a few times over the early 2000’s, and then came the day of his first BASE jump off the Potato Bridge in Twin Falls with Ivo Ninov and Ammon McNeely. I don’t remember why I was the teacher; I had a well-earned reputation in the BASE world of having a bit more ambition than skill. But all three of them jumped and landed perfectly. The next day they again made perfect jumps and I followed with my first attempt at swooping a smaller BASE canopy. It resulted in a horribly sprained ankle that still swells up periodically today. Sean, Ammon and Ivo took turns carrying me out and drove me to the hospital. That began my path of getting out of BASE.

I sold Sean one of my BASE rigs and he started the path of becoming the most prolific U.S/ wingsuit base jumper in history. He found more new wingsuit exits in The West than probably anyone. Even though I retired from BASE jumping shortly after Sean got into it, I lived vicariously through him. We shared notes on what was possible that had never been done. We talked about the dangers of the sport, which are massive. He was fully aware and I think I knew where his head was at — my own head had been there. It was that delicious time when increasing skill and wingsuit design progression matched up with the fact we were (and still are) in a Golden Age of the sport with unlimited “first exits” waiting to be nabbed. A great BASE flight is one of the greatest feelings in the world. And sadly it has taken way too many of my friends, including one of the Great Ones of all time, Sean Leary.