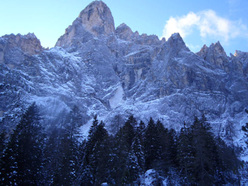 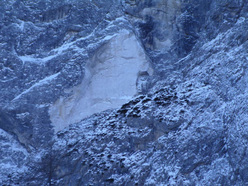 A section at the base of the East Face of Sass Maor has collapsed in the Pale di San Martino range in the Dolomites.

It's happened again. Another collapse of a rock face in the Dolomites. This time it has affected what is without a doubt one of the symbols of the Pale di San Martino, the famous Sass Maor. The collapse took place last Wednesday and took with it a pillar at the base of the enormous East Face, something in the region of 100m high and 50m wide... An impressive rock fall therefore, even if those who have seen it say it is nothing compared to the 2008 collapse of Cima Una in Val Fiscalina.

As Manolo and Rifugio Pradidali hut warden Duilio Boninsegna stated, collapses of this sort are a characteristic element of these mountains, both beautiful and particular perhaps also for this reason. Manolo added that ever since he can remember, he has seen these mountains tumble but never grow... also because, at the time, he wasn't lucky enough to watch them emerge from the sea...

What is impressive is that the collapse affected an area at the base of the East Face which appeared to offer solid, grey rock which for climbers is synonymous with guaranteed solidity. That large, fresh white scar left behind within that sea of grey is frightening and luck had it - some benevolent twist of fate - that the fall occurred in a season when very few venture up there, meaning that no walkers or climbers were injured.

The fall has affected some climbs and estimating the "alpine" damages is no mean task. As mentioned, the collapse is located at the base of the East Face - at the start therefore of that first section which almost all climbers skip, preferring instead to reach the routes via the large ledge at half-height. Via Masada in particular has lost its first three pitches, including the starting corner which has literally disappeared. The loss is significant but not irreparable for this 2001 line established by Marco Canteri, Davide Depaoli and the great Samuele Scalet.

Another start which has been swept away is the Bettega variation to the Solleder route, i.e. the lower section which joins the historic and famous climb established by Solleder and Kummer in 1926. It's worth remembering that this route was first ascended off the middle ledge and is therefore unaffected by the fall. The third and probable last route to be modified is The change is life established by Igor Koller. According to the information we have, it seems as if Manolo's Supermatita is unaffected (some had initially stated that it had been included in the collapse) as well as all the other routes up the East Face.

The remains of the "pillar" fell onto the scree slope which leads to the start of the Via ferrata del Sentiero del Cacciatore, and debris has also been found on the Portella path. What is certain is that these will be free by the start of the next season.