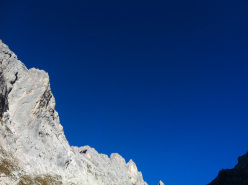 German climber Roland Hemetzberger and his climbing partner Fabian Hagenauer have made the first free ascent of Südwand, the 150m high outing up the exposed South Face of the Karlspitz in Austria's Wilder Kaiser massif first ascended by Jürgen Vogt and Michael Olzowy in 1969. At the time the two completed their route with difficulties up to VI- and A1 aid on the three central pitches, and after checking the route just once beforehand Hemetzberger made the most of perfect autumn conditions to free the line yesterday with difficulties up to 10- (8a).

The individual pitches now go free at 4-, 8-, 9+/10-, 6+, 8- and Hemetzberger explained "the 3rd pitch checks in at roughly 10-, to get past a blank section the first ascentionists hammered a peg to climb it A0, and to free this I pulled out the old peg and used the hold to continue upwards."

What makes this climb noteworthy, difficulty apart, is that the entire line is protected by trad gear, making it the hardest completely bolt-free multi-pitch in the Kaisergebirge.