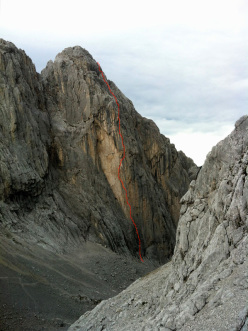 "A 350 metre face, 13 pitches, VI-/A2, first ascent in 1957, just a few repeats, bad protection, loose rock - these are the hard facts about the legendary Noichl Wörndl, also known as Direkte Ostwand located on the Fleischbank in the Wilder Kaiser massif. It sounded like a great adventure."

An adventure for German climber Roland Hemetzberger which materialised into five new pitches - pretty much a direct start to avoid the loose rock - to the route established by Mathias Noichl and Hans Wörndl in July '57. After another relatively easy pitch came the real difficulties, the three pitches established with the use of aid. Hemetzberger, Christian Denk and Fabian Hagenauer used the gear left in-situ 50 years ago "to preserve the original character of the route" but added bolts at the belays to breach difficulties up to 8b/8b+. A further two new pitches (both with just a single bolt) led to easier terrain and the final 3 pitches of the original route.

Hemetzberger freed the line on 3 October and Relikt Noichl Wörndl is now the third route in the Wilder Kaiser which ascends these difficulties, after his recent first free ascent of Südwand and obviously after Des Kaisers neue Kleider (8b+) established in 1994 by Stefan Glowacz.