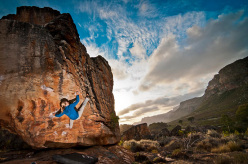 We have received and published the statement issued by the The Mountain Club of South Africa concerning the recent land closure that has affected the bouldering in the world famous Rocklands area.

Bad news from South Africa currently in the height of the winter bouldering season: on 28 July the Tea Garden area of Rocklands was closed to climbing and bouldering as a direct result of the disrespect boulderers have shown in the past to the land and its owner. While the Tea Garden is a relatively small part of Rocklands, it is nevertheless an extremely popular area with plenty of outstanding problems from 6C to 7C. Its loss, hopefully temporary, comes as a powerful reminder to the importance of respecting nature and other people's property and is, as can be read from the official press release below, a poignant indication to a greater malaise that could affect the entire Rocklands area should climbers not take heed. Personally we are, once again, saddened and disheartened by the lack of respect and also intelligence demonstrated by those climbers who, through their actions make these bans a reality (not only at Rocklands) and contribute to ruining the environment.

When climbing became a prominent activity in the Cederberg, the Mountain Club of South Africa (MCSA) and Cape Nature (CN) drew up the Cederberg Environmental Management Programme (EMP) to jointly manage climbing in the Cederberg, including bouldering in Rocklands. It was agreed that permits would need to be purchased in order to maintain the pathways and environment of the bouldering areas, which all cost money, and that climbers would need to adhere to certain rules in order to prevent irreparable damage to the environment. It was found through the EMP that bouldering has quite a substantial negative impact on the environment – more than sport or trad climbing. The private landowners have been allowing climbing on their land under the assumption that climbers would manage their climbing the same way that they would for Cape Nature Land.

Unfortunately, when Rocklands became internationally famous, this set of rules was not communicated effectively to the international climbers. As a result, the land began to suffer and the environment has sustained significant and continuous damage. This complete and utter disrespect for the land has caused both Cape Nature and the landowners to start viewing boulderers in a very negative light. All land belonging to one of the farmers has as of Saturday 28th June 2013 been closed to climbing; this includes Tea Garden and all areas from Klein Kliphuis down to Clanwilliam on both sides of the road. Anyone caught climbing in these areas will be prosecuted and probably fined by the landowner. To continue climbing in this area will only damage the reputation of boulderers even further.

The Wild Card is no longer accepted for Cape Nature Land and the permit is R60 per day per climber. The MCSA is scheduling meetings with CN to find a middle ground for this recent development. Fortunately, CN has agreed to accept the Wild Card for the 2013 bouldering season.

Delaney Carpenter (Chairperson of the MCSA Rock Climbing Committee, Cape Town Section) recently stood up at this year’s Rock Stock to inform all climbers of the current deteriorating relationship between climbers and the Rocklands’ landowners and has urged all climbers to adhere to the below rules when climbing in Rocklands:

1. Bury your faeces and carry out your toilet paper. If the ground is too hard to bury your faeces, please carry it out with you and dispose of it in the campsite bins. Poop bags are available for free at De Pakhys. (A special note about this: Tea Garden has been closed primarily due to this problem. Animals such as baboons may eat human faeces and could contract diseases such as Tuberculosis and hepatitis, which could prove detrimental to the population)
2. Do not litter – carry everything you bring in with you back out with you and dispose of your litter in the bins at the campsite.
3. Stick to the allocated paths marked by cairns and as illustrated in the guidebook. Diverting from these paths causes far more erosion than is necessary and may cause the extinction of certain sensitive plants in the area.
4. No graffiti on rock surfaces. (Black Shadow boulder has been closed to climbing due to graffiti)
5. No pof is allowed in Rocklands. The resin damages the rock surfaces and this damage is irreversible.

Most climbers have the attitude that things are not as bad as people say they are; that Rocklands will always be available to boulderers; that as long as they aren’t caught, there’s no problem. Boulderers don’t need to be caught defying these rules. Human faeces, filthy toilet paper, litter, cigarette butts, trampled vegetation, graffiti and pof are all evidence of the disobedience of climbers.

There are four farmers who make their living off of their land – the land that boulderers are trashing. One farmer has already closed her lands to boulderers. It is only a matter of time before the other three do the same. CN is clamping down on boulderers; their rangers are making more visits through the bouldering areas, insisting on permits.

The complete disrespect of boulderers for the land on which they climb is a very serious and very real threat to bouldering in Rocklands.

Rocklands bouldering is in peril.
Rocklands does not belong to the climbers.

Our access is not a right, it’s a privilege and our treatment of the land is the difference between us being allowed to climb in Rocklands and us being banned from climbing in Rocklands altogether.

Irresponsible boulderers have caused this problem and boulderers are the only ones who can fix it.

Please respect the land you climb on in South Africa and adhere to the above mentioned rules. Your privilege to climb in Rocklands depends on it.