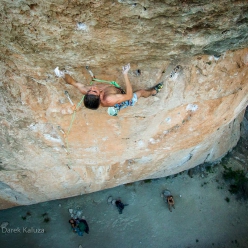 Piotr Schab making the first ascent, onsight, of Baby Boy at Cuenca in Spain on 27/06/2018
Photo by Darek Kaluza 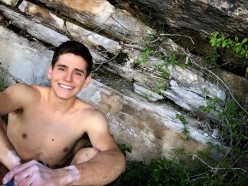 One of Poland’s strongest young climbers Piotr Schab has redpointed the 9a+ Biographie at Ceuse in France and made the onsight first ascent of Baby Boy, an 8c sports climb at Cuenca in Spain.

Piotr Schab, the climber at the forefront of Poland’s impressively strong next generation, is currently enjoying an unprecedented run for his money in France and Spain. In April the 21-year-old from Kraków redpointed the 9a+ Catxasa at Santa Linya, and backed this up in mid-June with Chris Sharma’s classic testpiece Biographie at Céüse. Schab had got painfully close last summer, having fallen a mere two moves below the top jug and although to many the redpoint seemed a mere formality, clipping the chains of this historic king line can never be taken for granted.

While this brings Schab’s tally of 9a+ to 4 after his 2017 ascent of Thor's Hammer in Flatanger, Norway and Papichulo at Oliana in 2016, his latest feat is arguably even more impressive: the first ascent, onsight, of Baby Boy at one of Spain’s oldest and most fearsome climbing areas, Cuenca.

Schab has suggested 8c for this route bolted by Darek Kałuża, and although harder onsight first ascents have been achieved in the past - notably the world’s first 8c+ onsight, on a previously unclimbed route, carried out by Patxi Usobiaga in 2007 - performances of this intensity are few and far between.

It’s worth noting that prior to Baby Boy, Schab onsighted another two 8c’s and fell off the last move of the 8c+ Potemkin when a foothold broke…