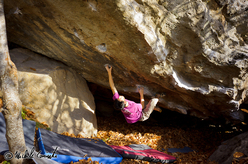 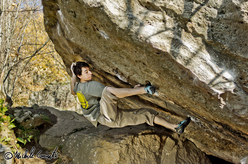 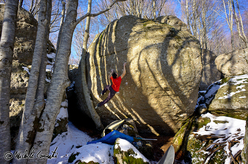 Michele Caminati talks about the first ascent of his latest creation, Ultimo dei Moicani 8B+ freed on 19 January at Amiata in Tuscany.

Exactly two weeks ago we mentioned that Michele Caminati had freed two great problems at Amiata in Tuscany and that he was beavering away at a new project. Well now, not even a fortnight later, the climber from Parma has freed the line which with a dyno to a tiny crimp adds a new finish to an existing problem. Caminati's creation is called Ultimo dei Moicani - the last of the Mohicans - and is located on the boulder which hosts two other lines, The First and also the Penultimate of the Mohecans. Confused? Let Caminati take you on a journey through his latest Tuscany adventure which, in the end, resulted in this great 8B+.


Winter in Amiata
by Michele Caminati

I first visited the Chiesina sector in September 2008 and in just a couple of days managed to free "Il Penultimo dei Moicani", perhaps the most logical line straight through the roof. The boulder hosted other problems, namely a classic 7b called "Tetto della Chiesina" and a 7c called "Il Primo dei Moicani" which reaches an obvious pocket in the middle but then exits right onto the arete (joining the 7b) and in doing so avoids the hardest and most beautiful move of the 8a version. It seemed as if there was nothing left to do there, but I'd always been curious to check out that nice crimp located on the left-hand side of the overhang, from where another finish seemed feasible. But at the time it also proved decidedly too difficult...

I returned in winter 2009 to this sector which thanks to its orientation remains dry and receives the winter sun. I started to give that crimp and dyno some serious thought and convinced myself that it was possible, even if really difficult for someone my height. This is how the idea came about of freeing Ultimo dei Moicani, the last of the Mohicans and unsurprisingly also the last possible variation through this roof. In winter 2010 I spent two or three weeks at the Chiesina sector, and this was followed by a final, nearly two-month siege this winter. I spent the Christmas and New Year holidays at Monte Amiata in search of good conditions but unfortunately these remained elusive due to the recent spring-like weather.

Giving the problem a grade is no mean task, especially since the only really difficult move is that long dyno from the pocket to the crimp, where the key to success is pushing off the footholds properly. Since I'm not tall enough to static the move by using the good footholds lower down I was forced to dyno using the higher footholds, but this contorted me into a somewhat unnatural position... Having said that, I think the problem is the hardest thing I've climbed to date and it certainly represented my most intense psychological challenge, seeing that I only had a very limited number of tries each time before my skin got trashed.

For a while now I've been considering the fact that bouldering grades are something which hold little objective value, and only those who try a problem again and again can actually give it a grade. For what it's worth - and taking into account how much I've had to put in to freeing it - I suggest 8B+, but I'm curious to find out what others think since up to now I've been the only one to seriously give it a go.

Anyone who has seen the video and likes the line is invited to come a try it. There are loads of problems of all grades in the area and in winter the climate is particularly mild. I'm currently preparing a longer video which gives an overview of the bouldering at Amiata and my friend Bengio is working on a guidebook which will partially cover the area seeing that there are still plenty of sectors which still need to be unearthed and cleaned. For further information and to go climbing with a local write to clubdellolmo@yahoo.it or just go visit him in the evenings in his bar called "Il Club Dell’ Olmo" located in the centre of Santa Fiora.

Those wishing to visit the Chiesina should be particularly discreet, it's located in a private chestnut forest and access is totally forbidden in October when the chestnuts are harvested. Climbing is possible during the hotter months of the year by bouldering at the cooler, higher sectors Case Marchi (1000m) and Della vetta (1550,). The recently discovered sector Vivo D’Orcia needs brushing completely... any volunteers kindly accepted!