Melloblocco 2016, the biggest bouldering and climbing meeting in the world, will be held in Val di Mello - Val Masino, Italy, from 5 - 8 May 2016.
Photo by Giulio Malfer 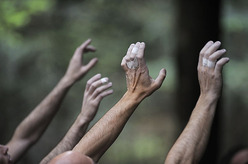 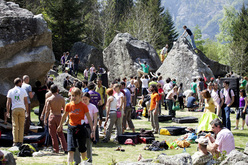 Melloblocco 2016 and the hormonal bouldering storms

The date is set for the 13th edition Melloblocco. An invitation, bordering between fantasy and history, to join the world's biggest climbing and bouldering meeting that will take place, as ever, in Italy's Val Masino - Val di Mello from 5 to 8 May 2016.

The date's set for Melloblocco #13 which, by now, is a teenager. Yes, even Mello, after its first 13 years, is preparing to bid farewell to middle school. And, as everyone knows, its time to make some first decisions. Upper school is on the horizon. And, at the same time, there's an overwhelming flood of memories, those which forebode an oncoming adolescence ... and hormone storms. Questions arise such as who are we? who am I? what will I be, and what will I do... and all those other questions, often unspoken, and even more often left without answers. In the meantime everything flows fluidly and moves forward inexorably. A bit like Mello, but also a bit like life in general, as it races forward, faster and faster and never stops. There seems to be no space or time to contemplate emotions even. Not even that beauty and happiness that we've seen and experienced seem to leave a trace. And yet the youngsters, like Mello, still have their territory of dreams in that no man's land that opens out into the world adulthood. It's that kingdom of fantasy and games where everything, almost anything, can be imagined, seen, experienced, found. It's possible, for example, to discover a small and hidden land like Val Masino and the splendid Val di Mello. And discover that, as if by magical destiny or thanks to the Gods of wind, water and the rocks, up there in this enchanted valley the game of bouldering has its own little paradise.

Of course, you need to be capable of seeing. You need to be a bit crazy, slightly visionary, in order to believe. But at times, just like children at play, all you need to do is simply let your imagination take flight. And then, every now and then, things actually happen. This is how the Mello game, of if you prefer the game of bouldering and climbing free, as an end it itself, has grown. Year after year, one Melloblocco after the next, they flocked in thousands. From all over Italy, but also from all over the world, to meet up and climb the boulders (but not only these) in the Valley of Wonders. They admired the waterfalls (those that curve). They camped along the river. Guided by the (indecipherable) treasure map they got lost, to discover and solve the thousand and one problems. They got to know each other. Met up once again. Sang, dances, climbed together. Got to know ''looove". Fought to climb their problems. Won (or tried to win) peacefully against gravity. Fell, thousands, and thousands, of times. They rode those gravitational waves, whose existence (the climbers) have always suspected. They respected the Valley and the Valley adopted them. They also braved the rain and smiled with the sun... because climbing is nothing more than a game, and the game never ends. Just like Melloblocco which is, and always will be, a happy game for those (youngsters and elders) who still know how to play and have fun together, regardless of the hormonal storms of bouldering.