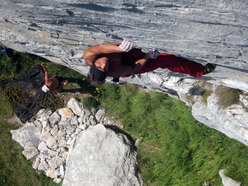 The "wrinkles" on Eternit
Photo by Cristina Zorzi 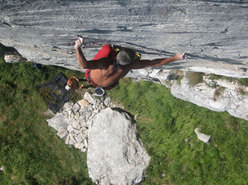 Manolo before the rest...
Photo by Cristina Zorzi 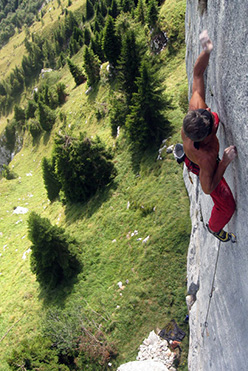 Manolo at the dyno
Photo by Cristina Zorzi 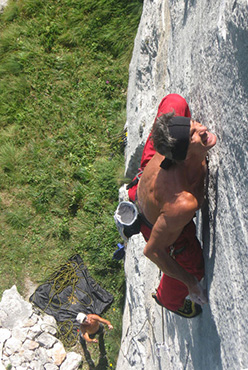 On 24/08/2009 Maurizio Manolo Zanolla made the first ascent of "Eternit", the extension to "O ce l’hai… o ne hai bisogno" at Baule. The grade put forward is 9a but above all Manolo believes this route has taken his vertical slab climbing into a completely new dimension.

19 years ago he thought it was impossible to climb futher still and that's how "O ce l’hai… o ne hai bisogno", 8b/8b+ came to life at the beautiful elite crag Baule at the Vette Feltrine, high in the Italian Dolomites. At the time the route ground to a halt before that final, inaccessible wall and during all these years the incredible sheer vertical mirror remained there, virgin. Climbing further simply seemed too much, even for Manolo, alias Maurizio Zanolla.

Along the lines of "you can't keep a good man down", on 24 August this enigma was finally resolved. Exactly 19 years down the line Manolo has now finally discovered the solution, extending the original journey to its natural finish at the top of the crag.

This is the story of Eternit which Manolo describes as "an incredible route. Completely natural (except for one consolidated hold). But above all absolutely vertical, it doesn't even overhang half a meter." Manolo continues "Eternit offers a selection of horizontal and vertical microcrimps, undercuts and slopers. Two moves are decidedly "touch-and-go" but paradoxically they aren't that difficult to decipher because it's so smooth that the handholds and footholds leap into view... the problem is holding them!"

Manolo has no doubt whatsoever when it comes to the grade of the route: "Eternit is undoubtedly more demanding than all the others I've climbed in this style, from Bain de Sang to Thin Ice, Appigli ridicole and Bimbaluna. You don't need great stamina for this completely vertical wall but from halfway onwards your forearms swell dangerously and on some single moves you need really toned fingers. Furthermore, raw power doesn't suffice for this route and if your footwork isn't half decent... it's really hard to raise your knees on that wall..."

Although we feel as if we're repeating ourselves by reminding everyone that Manolo is 51 years of age, we feel it's right to underline what he himself admits: that on Eternit he had the clear sensation of having explored a new dimension of vertical slab climbing. And if this sensation comes from him, then things immediately become interesting for everyone!

For Manolo Eternit is a bench mark of his experience as a climber and he has no doubt in putting it forward as an absolute top route for the art of slab climbing. By the way, the proposed grade is 9a... and above all, the emotions that this route can give are enormous. Check out how Manolo describes these 11 minutes, 38 seconds and 60 moves of his life...

Eternit… first of all because not everything that comes from Switzerland is good for you... and then because this route hurts, it hurts your fingers, head, feet. It has a verticality which is lightweight, inviting, but which can become poisonous at any moment. All of a sudden everything which seems easy can become paralysing and that deadpoint which you've earned through so much effort transforms in the chaos into something elusive, absolutely useless and you have to start all over again.

Reaching the summit was difficult and full of twists and turns, the path that took me there passed alternate phases of frustrating injuries and moments of different physical and psychological form, at times so intense that they created or destroyed any motivation. All of a sudden though it seemed as if there was no time left (and perhaps this really was the case) and so everything became long, far too long. The wearing wait, indispensable to recover from injuries, left me no room for anything else, summer was passing by like a train and I, at this point, could only watch as it passed on by.

When I grabbed the top of the crag I screamed, I almost hated the rock but, in truth, for only a second. The year hadn't begun badly and the first results fuelled fantastic projects, but life is surprising and at times if you look too far ahead it steals time from the present and it forces you to seek refuge in the past, even if this is already something to feel lucky about.

When in 1990 I bolted "“O ce l’hai… o ne hai bisogno" that final section seemed impossible so I placed the belay where I thought the climbing ended. Only after having (re-freed) Appigli ridicoli I took a closer look at the "uncompleted" section, fascinated by the compactness which seemed inaccessible. Only one crimp emerged, desolated by that mirror, seemingly impossible to reach and, worse still, impossible to continue climbing from. Searching closer between that unorganised series of wrinkles a trace slowly came into view, but so did other things in life and for a while that section remained suspended in mid-air.

Today at the car park the air was electrifying and as I walked up a gust of fresh dry air hit me like a brick. The violent storm which had passed by two days ago had driven away the terrible heat and had brought thin air from the north which promised friction. I was happy and I breathed it in with all my might, but suddenly I felt nervous. Those nigh optimal conditions weighed me down with new responsibilities.

Not even the warm-up pitch, which is never the same even if it is always the same, alleviated my strange state of mind. The weight of those sixty moves seemed to oppress me while at the same time an extremely light desire wanted to drag me in a different direction.

There was a grandiose calm up here, the terse air seemed to enable us to see everywhere, even within and beyond the mountains. Everything became less important, all I needed to do was climb, and that knowledge that now wouldn't suffice became lighter still.

The traverse was nasty, pungent, this section was intense and it stole my energies, even the mental ones but I was precise, I made a dyno, I climbed without hesitation and I reached that final rest better than usual. Fifteen more moves from here to the sky... but they were disarmingly heavy. I waited for my heart to slow before compressing beneath that elusive undercut.

I automatically searched for that wrinkle which I never knew how to hold and which, whatever way you grabbed it, always seemed a nightmare. I dragged myself up the vertical and, while the rubber began to slip, reached up towards the only decent crimp. I wanted to sink my fingers into it but couldn't, I needed to raise my feet, move upwards immediately, before everything ground to a halt. I was about to become paralysed once more... but I trusted those millimetres of smooth limestone, just in time.

I clipped the rope, reached out on nothing and everything seemed to capsize once again. I couldn't take it any more, I wanted to slip and alleviate the pain from my arms, from my head. I delegated all the responsibility to my feet, my shoes, the rubber. I didn't want anything to do with it anymore, slip, just let them slip. But there was still a spark of anger left within me, I loaded and sprung up, far away to the edge of those 11 minutes, 38 seconds and 60 moves of my life. Exactly 19 years after having thought it was impossible.

I'd like to thank all the friends who in some way or other have been close to me, from Professor Stefani to Professor Grappiolo with his epigraphical diagnosis, but also Marco Morelli who still believes in the impossible, Montura, La Sportiva and Grivel who continue to help me but above all Cristina who this time really exceeded herself.