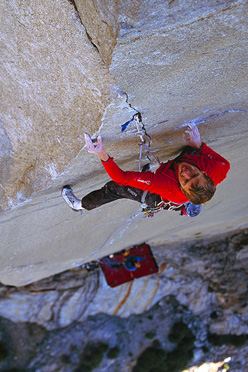 Leo Houlding has concluded a nigh ten-year project on El Capitan by carrying out the first free ascent of The Prophet. The route takes a line up the right-hand-side of El Capitan, sharing the the first 5 pitches of Bad to the Bone before traversing towards the Secret Passage and then finishing up Eagle's Way.

Houlding had originally started the route ground-up in a day with Jason Pickles (with whom he climbed the West Face of Leaning Tower in 2001) and this June the duo had managed to free all the pitches bar one, the so-called "A1 beauty pitch".

Houlding and Pickles returned this autumn with the intention of freeing this pitch but were initially thwarted by what ever-watchful Tom Evans described as "one on the worst storms in memory". On his blog the veteran climber continued: "they were soaked, cold, buffeted by strong updrafts and yet they stayed in the fight. No going down for the lads... not this time."

Houlding freed the A1 beauty describing his new route as being "on the world’s great cliff and unquestionably the hardest I've ever tackled." We look forward to seeing the action on the upcoming Psyche II dvd.