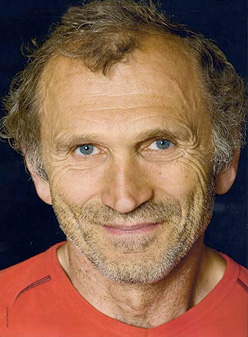 German climbing legend Kurt Albert is in intensive care after falling from a via ferrata in Bavaria, Germany.

According to the German Press Agency DPA and the climbing magazine Klettern, the 56-year-old German climbing legend Kurt Albert is currently in life-threatening condition after falling 18m from the via ferrata Höhenglücksteig in Bavaria, Germany, last Sunday.

Precise details about the accident are currently unknown but Albert was immediately transported to hopsital by helicopter and his condition had not improved on Monday.

Albert is famous for his pioneering activity first in his home Frankenjura, then across the entire vertical globe from Patagonia to the Karakorum via Greenland and Venezuela. He has been one of the sport's most important influences and it was he who coined the term "redpoint" in 1975 to indicate when a sport route has been climbed free, without the use of any artificial aid whatsoever. Planetmountain wishes Kurt the speediest of recoveries.

Update at 13:00 on 28/09/2010
Contrary to the numerous news reports on the internet, including Der Spiegel, Kurt Albert is not dead. He is in life-threatening condition, but the German press agency DPA has just confirmed to us that Albert is still alive.