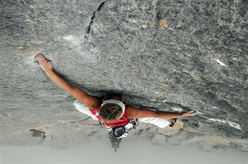 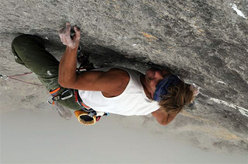 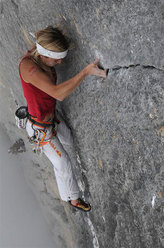 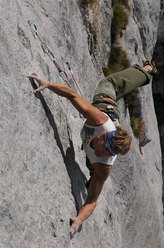 Interview with Jenny Lavarda after the first free ascent of "Solo per vecchi guerrieri" (150m, 8c+/9a, Vette Feltrine, Dolomites), first ascended by Manolo and repeated by Mario Prinoth and Riccardo Scarian. She was accompanied by Marco Ronchi who also managed to redpoint the route that day.

It all happened on 5 October. It was "a day I'll never forget for as long as I live" wrote Jenny Lavarda on her site. "Two months of attempts for 4 pitches on an absolutely amazing slab... A great journey which forced me to dig deep within myself, searching for my physical and mental limits." The journey Jenny is refering to is "Solo per vecchi guerrieri", the route which Manolo first ascended in 2006 on the North Face of El Colaz in the Feltrine Dolomites. This class outing was established in true Manolo, aka Magician, style and the 150m are divided up into 4 pitches: 7c, 7b+, 8b and 8c+/9a. Mario Prinoth grabbed the second ascent, while Riccado Scarian secured the third; both are regarded as excellent climbers and both have considerable multi-pitch experience. It's clear therefore that we wanted to find out more about this double free ascent at the hands of Jenny Lavarda and Marco Ronchi...


Jenny, so how was your free ascent of "Solo per vecchi guerrieri"? Are you a "warrior" too...

Yes, a bit, in the good sense of the word warrior. My free ascent came about on an absolutely perfect day. Perhaps one of my most beautiful and satisfying ascents ever...a real, great dream has finally come to life. For Marco too it was a great experience, to tell the truth he felt like a warrior because of the long approach we had to do so often.

Pure happiness. Now though you have yo explain to those who don't know Manolo's route what makes it so special? What won you over?
It's difficult to sum it up in just a few words what makes it so special; perhaps it's the void, the exceptional limestone, the pure line or the perfect holds... I don't really know myself. The only thing I'm sure about is that in 2006 this route bewitched me and since then I've never managed to get it out of my head. Marco doesn't know why this line is special either. Initially he came along to accompany me and soon he couldn't sleep at night, the moves had invaded his mind... he sat up in the middle of the night thinking about a solution to make a sequence easier... It's simply a magic line which captures you and touches you deep inside.

Let's take a step back. Before "Guerrieri", what other multi-pitches had you climbed?
When I was small I climbed a lot with my father in the mountains and long routes have always had a special place in my heart. I seconded many since I was little. In 2006 I was lucky enough to accompany my friend Mauro Bubu Bole on the "Larcher-Vigiani" on the SW Face of the Marmolada. That experience really touched me. I love the mountains and returning to them after so many years, to my great passion, was something absolutely magical and incredible.

You first tried "Guerrieri" together with Bubu Bole in 2006... How did it go? And how come so much time past, why did it reamin a dream?
Yes... the first times I laid hands on that splendid line was in distant October 2006 together with Mauro Bubu Bole. He had asked me if I wanted to accompany him and I immediately said yes. I remember perfectly that there were four of us on that route: not just me and Bubu but also Mario Prinoth and Riccardo Scarian. We worked the route for circa a month but because of one obligation or the other, the cold, my competitions and other problems I had to call it a day... that was a real shame. Unfortunately I didn't get another chance because Bubu abandoned the project and finding a suitable partner for this route is no mean task... But "Guerrieri" always remained in my heart. And finally this year I got the opportunity to return and live out my big dream.

So this summer you started to work it again with Marco Ronchi. Can you tell us about the steps you undertook and the style you used?
Yes, together with Marco this summer we decided to attempt "Solo per vecchi Guerrieri". The first time was just to check out the route and then slowly but surely we started to try the sequences, looking for the best solutions. You need a lot of humility to attempt such a difficult route... and so the first times we tried it on toprope, also because the first pitches are run-out and you really mustn't make a mistake. Only when we had perfected al the pitches move for move, foothold for foothold, did we start to lead it from below... and finally on Monday 5 October, after having got close the time before - above all me - did we manage to climb this beautiful work of art.

For the "statistics": did you count your number of attempts?
To tell the truth I never counted the number of attempts because as I said previously, the first weeks were spent toproping, attempting the single moves again and again. The first time it was really hard. It was like a jigsaw puzzle... right from the beginning we understood that the problem wasn't stamina but finding the right solution to the moves, above all the footholds...

Did you count the falls? They say that to lead the first pitch in particular you need to be courageous... how did you find it?
I fell off the last pitch loads of times, above all from the dyno at half height where I had to leap and lose contact with the rock completely... The first but above all the second pitch are run-out and you have to be very careful there. That's another reason why we chose to know the route well and every single move off by heart so as not to risk injuring ourselves.

You know well that in this small big climbing world there are many who are dubious about ascents made by other climbers... You too have been object of this at times. What do you think of this and above all how would you reply to doubts about your ascent of "Guerrieri"?
What can I say? I'm certainly not someone who is touched by these rumours; it's clear that I don't like them but I can't do anything about it. I can only say that these people should spend time doing more important things that to ruin the name and performances of others. I'm not sure if this is due to envy or something else, I'll continue doing what I want to do and I'm not the type of person who will phone them to say "Hey, today I'm going to do the route, d'you want to come and see..." We're in a democratic country and everyone can think what they choose. What is certain, if you really want to know, is that during my ascent of Pietramurata 8b+ and Reini's Vibes 8c/c+ there were plenty of people at the crag, well-known in the climbing scene. So... And anyway, I never doubt the climbs of others. And excuse me, even if it's not connected, I'm not someone who has never won anything. They can't say that I'm weak... In any case, I'd be please to try the route together with someone, perhaps that way they'll change their mind...

Apart from the grade. What were the greatest difficulties you encountered on this route? And how different are the demands compared to a single pitch, such as Claudio Cafè 8c/8c+ and Reini's Vibes 8c/8c+ at Arco?
A multi-pitch in the mountains isn't like a single pitch at the crag, certainly the mind plays a fundamental role. At the crag you're more relaxed. In all honesty my biggest worry was belaying my partner. "Guerrieri" climbs a vertical slab, if you mess things up you risk injuring your partner... At times it was hard, I was nervous because I was worried I'd mess things up for Marco... but luckily things ran smoothly.

Then came the double free ascent, yours and that of Marco, on the very same day.
Yes. It was an absolutely fantastic day... The temperature and conditions were perfect. It was magic and special... and the double ascent by me and Marco was the icing on the cake.

What's the most beautiful thing about "Solo per vecchi Guerrieri"?
Certainly climbing it together with my partner Marco, on the same day. The satisfaction of climbing this masterpiece was incredible. I don't think I've ever felt this way. When I finally managed to stick the dyno and top out I was invaded by immense joy and satisfaction. One of my biggest dreams had finally come to life... the mountains have always locked been in my heart.

And the "worst"?
The falls... every now and then we took some big ones.

Now that you've concentrated your efforts on big faces, do you think its the start of something new? Will we be seeing you climb other multi-pitches soon?
I've still got another project in mind, we'll see. It's an important route locked in my heart... just think, I've stuck the topo in my room and I look at it each night before going to sleep... Sooner or later I'll place my hands on it.

What did this route teach you?
Guerrieri taught me that footwork counts... and how!

How is Jenny Lavarda... what do you feel you are?
I feel I'm a girl who's trained a lot and very seriously, who has always sincerely admired other people's performances, who has never been envious of others and who has always attempted to go her own way without trampling on others-

How does she feel as a "warrior"?
I've always felt a bit like a "warrior"... not only because I've climbed this masterpiece... a warrior in life, too, always ready to battle and confront each individual problem. You have to be warriors in life if you want to obtain certain results... you have to feel it from within. And that's exactly how I feel.