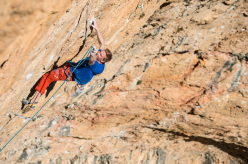 At Santa Linya in Spain an unstoppable Jakob Schubert sent five 9a routes.

Jakob Schubert started the year off with an impressive run of hard sport climbs which culminated with three 9a's in just 3 days, all climbed at Santa Linya in Spain. On 2 January the Austrian redpointed Analogica Natural and Fuck the System within this enormous limestone cave and followed this with Direct Open your Mind the next day. This 9a hattrick joins the two 9a's sent at the end of the year at Santa Linya, Ciudad de Dios and Seleccio Natural.

Five 9a's in less than 10 days are ample demonstration and the gauge of a grade which is absolutely ready to produce (much) more. If you add to this Schubert's other climbs at Margalef, then it's easy to see not only that the year started well for the 2012 Lead World Cup winner, but also comprehend the absolute strength of these athletes who, unsurprisingly, excel in competitions and also in sport climbing outdoors.