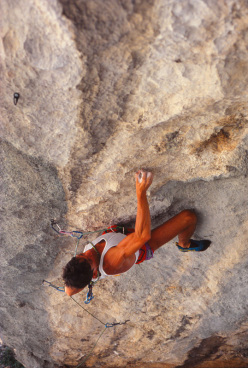 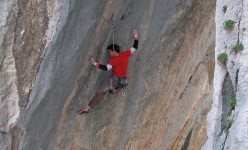 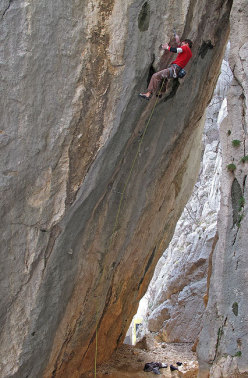 Il Maratoneta, third repeat by Ivan Lisica-Lija and a little history about this famous Manolo climb

It's called Il Maratoneta. It's located in Paklenica, Croatia. It's 15 metres high and, according to Croatian climber Ivan Lisica-Lija who made the route's third repeat on 27 January, the line is beautiful but offers "very old school climbing. Or, in other words, super precise and tehnical climbing like on a slab, except that it's solidly overhanging." It was back in 1987 when Manolo first discovered this perfect sheet of rock. At the time, like a sort of pre Forest Gump (the movie which stars Tom Hanks was produced in 1994) Manolo alternated climbing with running. And so it happened that, during one of his runs, Il Maratoneta captured his attention. Maybe it was just what he had been looking for. Or maybe it was that perfect, smooth face that found him. The fact of the matter is that he immediately bolted it. "The first few days" recounts Manolo "I fell several times towards the end of the route. So I decided to give it a miss, also because it was pretty hot at that time of year and my skin needed rebuilding. I ran on to Split and when I returned a few days later, I succeeded." The rest is what "legends" are made of. Suffice to say that the first repeat was made in 2001 (14 years later) by Slovenia's Uros Perko, followed a year later by his compatriot Marko Lukic. And now, 26 years after the first ascent, the 32-year-old Ivan Lisica-Lija from Split checks in with the third repeat. Lisica-Lija has an intense curriculum of repeats and news routes across Dalmatia and all three repeaters confirmed the 8b+ grade put forward by Manolo at the time. Maybe it's worth while pointing out that 8b+ in 1987 was the absolute top. And also, perhaps, that this route did not receive the recognition it deserved (like Malvasia, Manolo's other "legendary" Croatian route, bolted in 1987 and then freed by Manolo in 1988 and repeated in 2011 by Cody Roth). But probably these are nothing but minor details. The fact remains that Il Maratoneta, and the vision of 26 years ago, is still capable of motivating, of fueling the dreams of climbers like Ivan Lisica-Lija. "I first tried Il Maratoneta maybe 10 years ago" Ivan told us "just too caress the holds, but it was nothing serious until last summer when I spent 3 days on it in almost impossible conditions. That's why I returned again this winter and it took me 4 more days to redpoint it." It goes without saying that Ivan is extremely happy to have sent the route. And it goes without saying that we congratulate Ivan for his send and Manolo, too, whom we couldn't help but ask some questions about his route, about those days, his climbing back then and also now.

Il Maratoneta... 1987. Manolo, first of all I'd like to find out what you remember about that route (looking at the photo of you back then, the "holds" seem fairly small). What instant flashback springs to mind?
I remember that as soon as I saw that "sheet" leaning against the gorge wall, on the path that stayed in the shade pretty much all day long, that I had found everything I'd been looking for.

You were 29-years-old at the time, you'd just returned from a climbing trip to the States with Mauro Corona (this is a story in itself), you were on great form, so much so that The Nose on El Capitan "almost" gave you an on-sight, and you ran 40-50 km a day. My first instinct is to ask you what you were running away from. But instead I'll ask you what climbing meant to you then and what did you aspire to?
I wasn't running away from anywhere, in fact I was chasing my personal "lose weight naturally" record and I was in great shape, I felt good and wanted to do something more difficult. I had done some great stuff in California but now there was nothing more exciting than searching for new lines in places like this. Of course, I was on holiday... that sort of beach holiday that almost all of us who live in the mountains would like to go on at least once a year, but with the drill... and with a license to use it. And certainly not on sandy beaches. When I bolted that pitch it didn't seem that difficult, also because it wasn't very long, the crimps were quite positive and I thought I'd succeed fairly quickly. It reminded me a lot of Terminator at Totoga, but during my first attempts those crimps immediately became aggressive; they sapped my strength and grated my skin and the high temperatures didn't let me try much. So... rest... A strange word, but it was something I'd begun to consider in the United States. And it worked! A warm up... which wasn't lazing in the sun for 4 hours. It worked! Yes, it worked.

Il Maratoneta and then Malvasia, the other way "legendary" route you climbed in Croatia. What did they represent to you at the time? Were they special? And when does a route become something special for you?
Yes! Are special! Firstly because they are beautiful, different, far from home and far one from the other. They suited my style of climbing and were what I could afford at that time without having to invest too much time. Two routes I'd define as having "a strong personality."

A "thorny" matter, and probably irrelevant, but how did you grade them? In short, what basis did you use to suggest the grade and how important were they?
It wasn't hard; at the time I was trying to improve with all my might and was getting stronger and stronger. Everything I did confirmed this and at the time I could train twice a day. I continued to improve and these routes simply seemed harder than what I had done before. I didn't have any precise reference points of other routes, all I felt was that they were harder, and as usual I put forward a grade.

Looking back now at Il Maratoneta and Malvasia, and thinking that 22 years later - in 2009 - you hit 9a with Eternit and that last year you sent Roby Present 9a... can you tell us about the differences (if there are any) between your climbing ability now and then? Undoubtedly there has been some progress... so what are the differences? And what qualities and abilities (as an "oldie") help you most in improving?
At that particular time I was really interested in exploring my physical limits. Unfortunately though after Malvasya two serious accidents stopped me for almost two years and during that time my interest in pure difficulty almost disappeared for good. I still enjoyed climbing difficult lines, but I was also very attracted to alpinism and I continued to climb mountains. I dreamt of doing so in Patagonia, in the Himalayas, in Greenland, but all these dreams were swept away once again by other injuries that forced me to stop completely. When life didn't allow me to do that sort of alpinism, I focused on the game on difficulty once again. At first it was very tough, I realised that I needed to catch up, I lacked a lot of explosive power and endurance for really difficult things. Gaining pure strength was "relatively" easy, but to get endurance I had to adapt to something I'd practically never done before: work the routes. I didn't like it, I wasn't used to it mentally, but it led me to understand many things, including the fact that I still had great room for improvement. But I had to learn how to manage my physical strength in a more intelligent manner and not waste what, slowly but inevitably, would disappear. Fortunately, I didn't lack mental strength. I succeeded maybe also because I inherited a minimum of talent for climbing but especially thanks to plenty of hard work. Because talent, at least in sports, if left to its own accord always stops somewhere far earlier. So I could have done much better and much earlier, but I could also have not done anything all, and so all things considered it's fine like this.