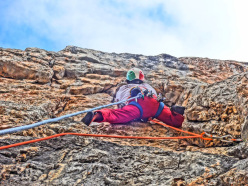 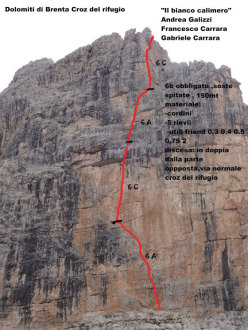 Croz del Rifugio faces east, boasts solid yellow and black slabs and from here, from the Pedrotti hut, you can enjoy breathtaking sunrises over the Val di Fassa Dolomites. Me, my twin brother and the other brother I didn’t have, with the support of the hut warden Franco Franz Nicolini, established a new climb protected by gear ranging from bolts to friends.

I don’t want to talk about the grade, even less so about the first ascent ethics as there would be far too much to talk about: why we chose to use bolts, why we decided to forge a line on such a small face instead of tackling one of the bigger peaks, for instance Brenta Alta, Tosa, Campanile Basso or the Margherita (just some of the Brenta peaks close to Rifugio Tosa Pedrotti that shaped the history of climbing in the Dolomites and that guard true masterpieces, included in Franco Franz Nicolini's "Pearls of the Brenta"). The answer to all the questions is that during my time off from working at the hut, I realized I wanted to do something together with my good friend nicknamed “il gallo".

It’s a way to bond even more, and experience the adventure a stone’s throw away from our front door. Often we travel who knows where to look for something new, without even realizing what’s close to home. We thought it was a good opportunity to test ourselves for a day, with our limited time available. And, why not, to enjoy unforgettable sunrises in the mountains?! All you need is a little motivation, get up early, and the rest comes by itself! For me, being there in the coolest hours of the day as the sun rose, together with my twin and a great friend, was superb!

Is it not the emotions that count?! We, for our part, felt so many I don’t know how to describe them. I could quote writers and poets who were inspired by dawn, but I’d risk writing something which is wrong and I’d forget to mention that at times all you need is to be immersed in silence, in the magic of nature and sit back and watch, in a word, for us to live.

On Croz del Rifugio there are some other routes, worth bearing in mind should the weather be dodgy. Rifugio Tosa Pedrotti and its unforgettable sunrises await in the Brenta Dolomites! Get training!