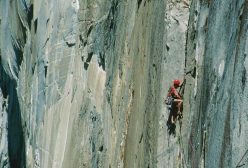 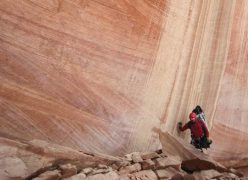 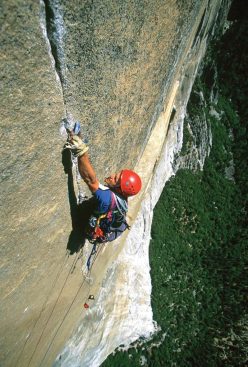 How to Big Wall climb by Chris McNamara

Interview with American climber Chris McNamara, an expert big wall climber and author of the recently published book How To Big Wall Climb.

What’s the most famous route in the world? Without wishing to stick our necks out too much, we can safely say that one of the most famous is certainly The Nose on El Capitan in Yosemite Valley, those legendary 1000 metres which have captured the imagination of generations of climbers ever since its first ascent at the hands of Warren Harding…. Back in  . Climbing The Nose is an important achievement every climbing curriculum but not everyone who attempts the route succeeds, the number of retreats is surprisingly high. In order to help everyone learn the right techniques to climb this route – and any other major line throughout the world – a new book now comes to the rescue, namely How To Big Wall Climb. A book and a manual written by American big wall expert Chris McNamara that explains via simple step-by-step instructions how to go about climbing a massive rock face, from the first step into an aider to the last hook before finally reaching the top after days spent on the wall. Numerous photos and – the novelty – online video tutorials complete the book which Chris McNamara required ten years to complete. This is what he shared with us about the manual, about big walls and about how to climb them.


Chris, first of all, what in your mind constitutes a big wall?

A big wall is a steep, multi-pitch ascent that takes most people more than a day to climb. Big walls are all about vertical exposure—climbing and sleeping with thousands of feet of air below you and thousands of feet of rock above you. There is nothing else like it. Big wall climbing is not about summit glory or pulling a single hard move or savouring the rush of adrenaline, although all three of those things will happen. The experience is much more complex and rich. You don’t flirt with gravity like you might while BASE jumping or doing a hard single-pitch climb. You live with gravity and exposure 24 hours a day.

So can you still remember how you felt on your first big wall?
Yes, my first big wall was the West Face of El Capitan. It can’t overstate how much this climb changed me. It’s the most intense, raw and terrifying experience I have ever had. The wall was vertical so there was often nothing but a thousand feet of air between my feet and the ground. From that high in the air the 200-foot trees at the base looked like little clumps of broccoli. And because we were climbing so hard with little water or food I was having minor hallucinations. It was the most difficult and draining thing I had ever done in my life. All I could think about was doing more of it!

Which explains more than 70 climbs up El Capitan! Yosemite seems to be increasingly popular, in particular The Nose…
It's hard to say if it's getting more popular. It's always been popular as long as I've been climbing. The one thing that hasn't changed is people are always going off The Nose. Maybe 60%. Which means a lot of frustration from the people who are bailing and the people who want to climb the route but can't because the lines long. My goal with this book is that more people will approach the nose prepared and there will be less retreating.

Yes. So tell us about the idea behind the book.
Climbing El Cap the first time is still one of the most memorable days of my life. I would give anything to relieve that experience again with the same level of heightened anticipation and adventure. But you only get one “first time.” So the next best thing for me is help other people succeed and hear their stories. I love meeting people who dream of climbing El Cap and exude that energy of half fear and half eager anticipation. You hear it in their voices. They know big wall climbing will step up their mental and physical climbing game - and they are excited about it. I hope this book becomes a starting point for an incredible adventure.

The book has been 10 years in the making…
It has taken ten years because I could not figure out how to illustrate the book. But now that we have youtube, you can read the book and then look at the photos and then watch the videos. I think that for learning how to do anything now it is best to have text photos and video.

Out of interest, what’s the most common mistake you see people make?
There is one big mistake: people learn the basics of aid leading but never master it. They also learn techniques that are too complicated and time consuming. They spend a few days practicing and go "this is easy, no problem." They then get on The Nose, and find everything is moving so much slower than they expected. Aid climbing is really all about efficiency. If you lead a pitch on the nose in an hour, the whole wall takes three days. If it takes two hours, you will take 6 days and be miserable. But, more likely, you will just bail after the first day.