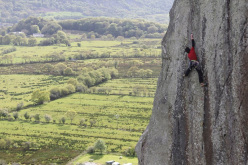 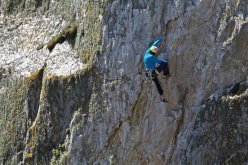 In May Hansjörg Auer from Austria on-sighted the famous route Strawberries first ascended by Ron Fawcett in 1980 at Tremadog in Wales. In more than 30 years this trad climb has only been on-sighted by Stefan Glowacz and Jorg Verhoeven.

Were you to make the impossible list of the most famous trad routes in Wales, you'd certainly have to mention the trio Cenotaph Corner, Left Wall and Right Wall high up at the crag Dinas Cromlech. And of course Great Wall, The Axe and The Indian Face at Cloggy, the shrine of British climbing more correctly referred to as Clogwyn Du'r Arddu. A Dream of White Horses at Gogarth. And Vector, Void and Cream at Tremadog. And also Strawberries, located high above the lushous green meadows and one of the many Ron Fawcett masterpieces freed in 1980 which, at the time, was one of the hardest in the United Kingdom. Strawberries truly has something extraordinary and special about it and, as we wrote previously, hides in its E6 6c a fierce crux right at the top, difficult to protect and which almost always ends with a spectacular final run-out.

In the years that followed the first ascent, Strawberries reached legendary status amongst Her Majesty's subjects. Also because, unlike other climbs with bigger grades attached, this fruit has proven almost impossible to climb on-sight. Almost, because all the strongest have taken the bow and their fall, bar German climber German Stefan Glowacz who with his first on-sight in 1987 probably didn't realise exactly what he had achieved.

Yes, because the route resisted all further assaults for almost a quarter of a century until, in 2011, Dutchman Jorg Verhoeven managed to send it in the purest of styles. And now there's a third success, the third time in 32 years and it comes as no surprise that the moves were interpreted faultlessly by Hansjörg Auer, the Austrian who is certainly deft at placing gear and dealing with long falls (even if you don't count his even more incredible free-solo of the Fish Route up Marmolada in the Dolomites which, technically, is perhaps in a completely different league compared to any run-out imaginable).

"It felt hard to get into the crack" Auer explained when thinking about the climb "after placing two bad wires and two cams I place another one. I'm not sure how I should climb the next meters however I set off. Some tricky moves on bad sidepulls, trusting my feet I go for a long crossover to what I hope is a better hold. Crimping hard I reach far left. Looking up I recognise that just a few moves can destroy my dream. Keep cool. Breathe. After a couple of seconds I get the final jug, scream while scrambling over the rim. I can't believe that it's happened to me."

After his trip Auer told planetmountain: "I was impressed with how much you can actually protect using trad gear. I'm obviously familiar with a similar approach on multi-pitches, but seeing this on single pitches was relatively new for me and the UK has decades of strict climbing ethics which very few ignore. The routes I climbed were physically relatively easy but psychologically demanding. I was struck by the overall adventure: a climbing day in Pembroke for example is far more adventurous than any day sports climbing at the crag. Because of all this effort involved, routes take on a different status, you climb far fewer, but for me the experience and value is far, far greater."

Talking about adventures: Auer will shortly head off on a two month trip to to Baffin Island. "Yes, I'm off with Eneko and Iker Pou as well as Ben Lepesan. We're hopefully going to explore the relatively uncharted Perfection valley, 80km SE of Clyde River. And hopefully we'll establish a new big wall, with as much free climbing as possible. We have a satellite telephone, but it's only for emergencies." We'll find out more after summer!