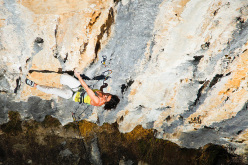 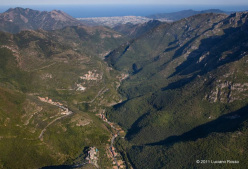 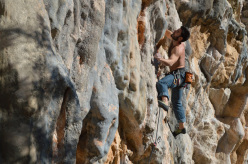 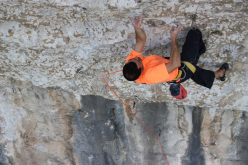 Marco Balda introduces the climbing in Val Pennavaire (Liguria), also known as Albenga. With 1,300 routes and 41 crags, this is one of the most popular climbing areas in Italy.

Located in NW Italy, the western tip of the Liguria region is certainly one of the country's most important climbing areas. While Finale reigned supreme throughout the 1980's, the first edition of the guidebook Oltrefinale (Beyond Finale) invited climbers to look elsewhere, to move away from the famous cliffs and explore new areas close by. One of the valleys mentioned in this guidebook at the time was Valle Pennavaire, more commonly referred to as Albenga. The first climbs in this area date back to the early '90s, when Claudio Laureri and Fulvio Balbi bolted a handful of beautiful and important routes at Bauso di Veravo, while Manlio Motto added routes to Rocca Rossa and Andrea Gallo developed Castelbianco. Along with Rocca dell'Arma, and thanks to the climbers Lodovico Spiota and Marco Pukli who created the crags Fontana and Malavoglia, the first Oltrefinale guidebook included circa 140 routes and 9 crags. These routes very much reflect the style of that era, namely nigh vertical slabs with the odd overlap here and there.

Along came the new millennium and with it a change of fashion. The valley became a laboratory to experiment with new routes; the driving force behind this new development were Luca Biondi and Andrea Bisio a.k.a. Dinda and the routes they developed were modern stamina outings up beautifully weathered, slightly overhanging limestone past tufas, slopers and underclings. One crag after the next was created and in just a few years the guidebook author Andrea Gallo was forced to publish his second edition to Oltrefinale. This included, from Val Pennavaire alone, over 600 routes and 25 crags.

Since then not much has changed, the same tune can be heard throughout the valley. Danilo Bo' and the duo Matteo Felanda / Angelo Corso have played a starring role in this concert. Crags have sprouted up like mushrooms. One discovery has led to the next. A short ramble off the beaten track and hey, yet more virgin rock. As a result this valley has transformed into a prime destination for Italian and foreign climbers, both in winter as in summer. Just like a narrow canyon, you can choose to climb in the sun on the left bank, or in the shade on the opposite side of the valley.

We're currently experiencing a new era that places the valley third in the list of most popular sport climbing areas in Italy, after Arco and Finale. 1300 climbs and 41 crags in just the a few kilometres... Climbing in Val Pennavaire means climbing in safety, in a playful and fun ambient. The crags are easy to find and there is something for both beginners and pros. Climbing in the valley in recent years also means taking part in a movement, in being part of the change, being a part of the climbing community and sharing this love for climbing with others in an honest and genuine manner.

At present Val Pennavaire boasts 41 crags, located in two macro areas that lie just a dozen or so kilometres from each other: the upper area Alto / Caprauna and the lower area Castelbianco / Veravo. The website of the local climbing club RocPennavaire provides an extensive table that lists all the crags, the difficulties, orientation, approach and rock type. The most interesting crags are certainly Emisfero, Erboristeria, Enoteca, Cineplex, Reunion and Famiglia, all ideal for climbing in the shade, while Terminal, Telematica Euskal, Colosseo, Basura, Red Up and Bauso receive the warm sun. Terminal for example offers more than 100 stamina climbs up vertical and slightly overhanging limestone, while the trio Euskal/Colosseo/Basura offer another hundred or so routes of all shapes and sizes, ranging from steep overhangs to delicate slabs, with difficulties ranging from 6b - 8b. The crag Red Up was recently described by the magazine Pareti as one of the most beautiful, difficult tufa crags in Northern Italy, while the slabs at Telematica are never harder than 6b+ and therefore accessible to most.

It's difficult to keep up with all the development given the vast quantity of rock that is constantly being discovered by the climbers of the RocPennavaire club. Bar Neva, at Cisano sul Neva, is certainly the best place for up-to-date information and acts the climbers' hangout. A small guidebook is on sale there and there is also a village climbing shop should you need more gear.

This massive effort, made by the club to promote climbing tourism in this valley, has resulted in a dozen or so B&B's and farm holidays. A campsite is still missing though and every weekend the Bauso Tourist office parking lot fills uncomfortably to the brim with vans and campers. The greatest help you can provide is by climbing at Pennavaire; in doing so you will prove that the valley can offer an alternative to seaside tourism, or that connected to harvesting olives and fruit. If you can, come and join us on Saturday December 14th at the club's annual dinner. Because this time the cocktail and buffet are free of charge!

Take the motorway Genova-Ventimiglia (A10), exit at Albenga and follow the main road #582 towards Garessio, to Martinetto. Turn off left onto the #14 and enter Val Pennavaire. The first sectors are located just after Castelbianco. From the Albenga motorway exit circa 10-15 minutes and 10 km.