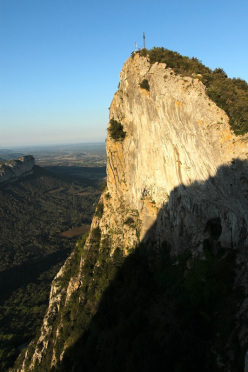 Swiss climber Cédric Lachat has made the first ascent of Staphylocoque 9a+ at Pic Saint Loup, France. The video of this and Nina Caprez climbing Hélix au pays des merveilles 8c+.

Cédric Lachat is back. After not climbing for 3 months because of a caving trip to Papua New Guinea and then due to illness, Swiss climber Lachat has celebrated his return to form by making the first ascent of what he believes might be his third 9a+, Staphylocoque at Pic Saint, France.

The route is a combination of Moksha, a 9a Lachat repeated in just a handful of attempts last week, and Kmira, a 40m project bolted by local climber Fedric Ferrare which may be somewhere in the region of 9b/b+. Lachat is keen to underline that Staphylocoque is in fact a very logical line, as can be seen in the video below that also includes Nina Caprez's recent 8c+ redpoint on Hélix au pays des merveilles.