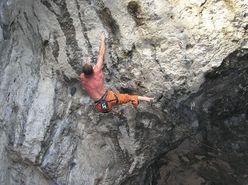 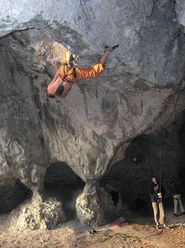 Bogdan Rokosz establishes 'Sprawa Honoru' 9a at the Mamutowa Cave in Poland.

On 14 December Bogdan Rokosz carried out the first ascent of Sprawa Honoru 9a at one of Poland's most popular limestone crags, the Mamutowa Cave located in the Kluczwoda Valley close to Krakow. Sprawa Honoru is one of the few climbs in Poland graded 9a and is a linkup of three existing routes. Dorota Dubicka gives the info.


Sprawa Honoru 9a (VI.8) at the Mamutowa Cave, Poland
On 14th December 2008 the list of Polish extreme routes of VI.8 (9a) grade was extended by another route. Sprawa Honoru is currently the hardest proposed grade in Mamutowa Cave (Kluczwoda Valley, near Krakow). It is a combination of three other pre-existing routes. The author of the route is one of the leading Polish climbers, Bogdan Rokosz. This was a very successful season for Bogdan whose hard redpoints include six VI.7 (8c) routes, one VI.7+ (8c+) and the above mentioned VI.8.

Bogdan spent his last few seasons in Mamutowa Cave working on Sprawa Honoru. As if by the chance, he also led some other hard lines in the cave, repeating them on several occasions - Capoeira 8c, Fumar Perjudica 8c and his own route Stal Mielec 8c+. It is worth mentioning that Mummy (as climbers familiarly call the Mamutowa Cave) is a legendary and cult place for climbers from Krakow (and not only). In no other Polish area is there such a density of extreme routes (from VI.6/8b to VI.7+/8c+) on a proverbial square meter.

Rokosz came up with the concept of Sprawa Honoru a few years ago. His ambition was to join three pre-xisting 8b routes: Mechanika Skreta Cienkiego, Czekajac Na Godoffa and Deklaracja Niesmiertelnosci (8b+). The result is an impressive line in the roof of the cave, offering around 50 moves, separated by two rests in the roof. Unfortunately, the route is not 100% natural – it occasionally uses chipped pockets and at one point an artificial hold. Yet, the author says: ‘I’ve already worked out a sequence omitting the artificial hold, which opens new possibilities...’

Bogdan Rokosz’s route is undoubtedly the biggest success in Polish sport climbing last year and maybe even in the last few years. It is especially valuable because it is the first route of this grade in Bogdan's career. At the same time Sprawa Honoru is probably only the third Polish 9a up to date. None of them have been repeated yet.

The 9a grade was introduced in Poland by Tomek Oleksy in 2000 who led a controversial (due to its eliminate character) route called Tysiac Kotletow at Roznow, a sandstone area. It is worth mentioning that Tomek is a widely recognized specialist from speed climbing – silver medal in World Championships, winner of World Cup in 2004 – and bouldering – bronze medal in Bouldering World Championships.

A year later Rafal Moucka climbed Pandemonium 9a at Golebnik Rock (Podzamcze). Rafal is an expert at climbing Polish white limestone, which usually offers slightly overhanging slabs with slippery micro-pockets and micro-edges. In the following years Rafal made the first ascents of another three lines which might revolve around the 9a grade but Rafal opted not to grade them. The lines are Arachnofobia (2002), Sen Astralny (2003) and Mental Terror (2004). It is hard to verify their grades because all these routes has been led only once – by their Rafal himself.

We hope that Sprawa Honoru will open a new chapter in the history of Polish 9a climbing, this time with repeats to which we invite rock masters from all over the world :)