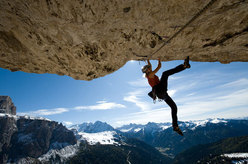 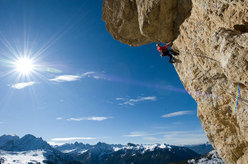 Angelika Rainer at the start of the fourth pitch (7c+) of Italia '61, Piz Ciavazes, Sella, Dolomites
Photo by Thomas Ulrich 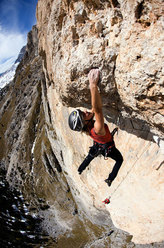 22 year old Angelika Rainer from the South Tyrol, best remembered for her competition performances in the Italian Lead Cup and the Ice Climbing World Cup, has recently made the first female ascent of Italia '61.

The quintessential aid route through the massive roof on the south face of Piz Ciavazes was first ascended in 1961 by Bepi De Francesch, Quinto Romanin, Emiliano Vuerich and Cesare Franceschetti. As many will remember the route was freed in 2004 by none other than Mauro 'Bubu' Bole, the eclectic climber who excelled in all vertical activities, from dry tooling to ice climbing competitions and the large rock faces in the Dolomites and Alps. This search for adventure seems also to be in Rainer's DNA, as can be gathered from her great debut on the historic Dolomite walls.


MISS ITALIA 1961 by Angelika Rainer
After winning the Italian Lead Cup in 2007 I decided to stop competing and focus my attention outdoors, on crags and big rock faces. Italia '61 sprung to mind and in spring 2008 I set off to check out the route. I was immediately taken in by the overhanging nature of the climbing but the route as a whole seemed really, really difficult. I really wanted to try it, but I was worried that my mountain experience wouldn't suffice and that I'd have to wait for a couple of years before being able to free the entire route. But Italia '61 had cast its spell on me and a month later I was back at the base of the wall.

It was a lot warmer and my fingers froze less so I managed to climb a whole lot better, which meant that I discovered sequences to all the hardest sections. My project and dream started to take shape, at least mentally!

On the hardest pitch, graded 8a, I really felt at ease. It's a horizontal 5m roof which starts with a difficult slab. Moves like these, so airy and powerful, are usually only found in a gym somewhere but here the difference is that you've got 150m of air beneath your feet... The pitch which gave me greatest cause for concern was the 7c+ immediatly beneneath the roof. The climbing here is completely different, technical and delicate and I needed quite a bit of time to discover a sequence which suited my style of climbing. But finally I managed to link these moves, too.

In September finally everything ran smoothly, one pitch after the next resulted in a complete free ascent of the route, everything turn out exactly how I had tried and remembered. First the hard 7c+, then the slab, then the 8a where I dynoed to the "thank god" final hold. I'd done it! The next pitch was easy and the last 7a+ I'd initally worried about ran smoothly, too. After just 2.5 hours I topped out. WOW!! I was really pleased with my first "alpine" result and I sat down to enjoy the splendid autumn sun. At home there was another surprise: Florian welcomed me with a ribbon with the words "Miss Italia" ;-)