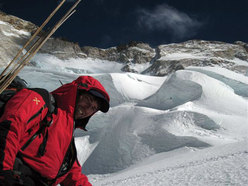 Luca Vuerich during an attempt of Makalu in winter 2008.
Photo by arch. Meroi-Benet-Vuerich

On 22 January 2010, 34 year old Italian mountaineer Luca Vuerich was killed by an avalanche while climbing an icefall at Prisojinik, close to Kranjska Gora on the Italian-Slovenian border. Vuerich was rescued and transported to hospital in Udine, where he died of his injuries.

Luca Vuerich has left us as well. Perhaps we should be "professional", "detached" if you wish. Concentrate on the facts only, recount the turn of events. But we cannot. With immense dejection, all that prevails is a sense of complete impotency. We know full well that this, too, is a part of alpinism, that this is a part of life itself. We've stated this many times previously, perhaps too often even. Vuerich was acutely aware of what his alpinism implied, of what his absolute passion for the mountains could result in. Yet once again the news hit us unprepared, like a blow to the stomach. Once again it seems as if we're locked in some sort of perverse spiral of an absurdly repetitive destiny.

Luca Vuerich was an ice climbing ace. But also an complete alpinist and rock climber. He was extremely talented in all disciplines, excelling on great rock faces, 8000m giants and skiing. He was a Mountain Guide. And knew the dangers of the mountains like the back of his hand. None of this though helped him yesterday morning on that icefall close to Kranjska Gora in Slovenia. An avalanche swept him away and dragged him down into a gully, fortunately missing his partner. This was immediately followed by the "usual", ineluctable and deaf sequence which repeats itself again and again. Call for help. Rescue. Transport to hospital in Udine. And the last hopes which faded, taking him away for ever.

We're here now, thinking about Luca Vuerich. About his manner, serious, passionate, almost silent and solitary, of living the mountains. A feeling which seemed to mirror the character of "his" peaks. The Jiulian Alps he loved so dearly and had first encountered with his father Luciano, an alpinist himself and also a photographer. Unsurprisingly, Luca's other great passion.

At 17 years of age Luca Vuerich had climbed all the routes of Emiloo Comici, Enzo Cozzolino, Ignazio Piussi as well as the hardest climbs in the Julian Alps. And this, for those who know something about alpinism, is already a proof of excellence. Subsequently he continued to perform outstandingly in all mountain activities. First extreme ski descents, such as that down the south face of Jof di Montasio. First winter ascents, such as the difficult Lomasti crack at Cima del Vallone or the first winter ascent in a day of the immense Sanjski Ozebnik on Tricorno. To these must be added more than sixty first ascents on ice falls, some up to 7-, as well as repeats of many classic routes in the Alps and Dolomites. And also the first winter ascent of the 7km "Cengia degli Dei", the ledge of the Gods which was a true homage to alpinism and the Jiulian Alps.

Perhaps it is this aesthetic and long traverse right through the wild heart of his peaks which provides the particular "meaning" to Luca Vuerich's mountaineering. And it certainly comes as no surprise that he shared this romantic adventure with Nives Meroi and Romano Benet: the friendship and brotherhood with this great mountaineering couple of the Julian Alps and Himalaya is key to understanding Vuerich's way of taking to the mountains. He believed in an alpinism shared with others, in which the relationship with the climbing partners is a central element.

Vuerich was 22 when he visited the Himalaya for the first time, to climb Nanga Parbat. This first encounter was devastating and Nives Meroi, Romano Benet, Maxi Stoffie and Fabio Agostinis laboured hard to bring him down from Camp 4 at 7500m. High altitude sickness had punished his youthful impulsiveness... Vuerich learnt his lesson and perhaps this enabled him to experience even more fully his beautiful adventure on the highest mountains in the world. A journey which, together with Nives Meroi and Romano Benet, took him to the summit of five 8000m peaks.

In 2003 the so-called Tarvisio-trio of Himalayan mountaineering succeeded in an exceptional hat-trick in a mere 20 days: Gasherbrum I (8035m), Gasherbrum II (8068m) and Broad Peak (8046m). In 2004 they climbed Lhotse, this was followed in 2008 by Manaslu (8163m). All climbs were carried out in their  hallmark lightweight style, without supplementary oxygen and high altitude porters.

His 8000m "booty" could certainly have been richer. But Luca Vuerich wasn't an alpinist who wanted to set new records rather, he had a life project. It is for this reason that he chose not to accompany his companions on other expeditions. He wanted to earn a living from the mountains, as a Mountain Guide. And this is exactly how things turned out. He qualified as a Guide and the mountains filled the life he chose to live.