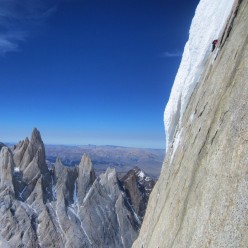 Alex Honnold at the end of the traverse pitch on Torre Egger's Huber-Schnarf route.
Photo by Colin Haley archive 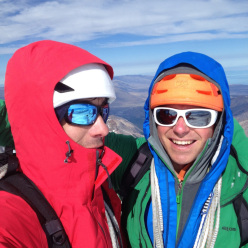 In Patagonia American alpinists Colin Haley and Alex Honnold have attempted a one day ascent of the Cerro Torre Traverse, enchaining Cerro Torre, Torre Egger, Punta Herron and Cerro Standhardt. The two were forced to turn back just two pitches below the last summit due to the Patagonian winds.

"Despite failing, it is probably the best day of climbing I've ever done in these mountains, and it certainly turned into the most epic experience I've had here." The words are those of Colin Haley and, as such, deserve attention. The American alpinist is referring to his latest bout out in the mountains together with Alex Honnold, back in Patagonia after last year’s Fitz Roy traverse carried out with Tommy Caldwell. Haley and Honnold "warmed up" with a fast one-day ascent of Torre Egger and then attempted to climb the famous Cerro Torre traverse in a single day. This enchainment of the peaks Cerro Torre, Torre Egger, Punta Herron and Aguja Standhardt was first climbed by Rolando Garibotti and Haley in 2008 over a four day period. After climbing it in three days and in reverse together with Canadian Marc-André Leclerc earlier this season, Haley now decided to attempt the incredible traverse together with Alex Honnold in a mere 24 hours... their attempt ground to a halt due to the infamous Patagonian weather a mere two pitches from the final summit.

Alex Honnold came up with the radical idea of trying the Torre Traverse in a day. On Saturday we tried despite marginal weather and conditions, citing Tommy Caldwell's motto of "We'll try until we can't continue."

It was still misting while approaching the Standhardt Col, the first pitch of Exocet had water streaming down the slab, and the ice chimney was in the worst condition I've encountered in the five times I've climbed it. We tried hard though, and summited Standhardt by 10:30am. We cruised over Punta Herron and Torre Egger, dispatching each in two pitches of simul-climbing, and started up the north face of Cerro Torre at 7:30pm. Alex led an impressive block, largely in the dark, with plentiful verglas, and with wind and clouds coming back in. I took us up the last pitch of the north face, and two pitches up the Ragni route, until we ran into the limit of Tommy's motto: the wind had quickly built into ballistic gusts that were knocking us around.

With only two pitches to finish, we took shelter in a protected nook and waited about two hours, half-sitting half-hanging, hoping the wind would lessen. Finally we conceded that the weather was only getting worse (the storm arrived a full 24 hours earlier than predicted), and that we had to get off the mountain as fast as possible.

In such stormy weather I was too scared to rappel the complicated and exposed north face, so we made an emergency decision to rappel the west face instead, committing ourselves to a soul-destroying march through Paso Marconi. When we finally reached civilization yesterday morning we had been going for 53 hours with no stove or bivy gear, and I had 200 calories to consume in the last 36 hours.

It's unfortunate that we didn't quite get to finish the goal, but I'm very pleased with our performance, knowing that if the weather had held out we would've easily finished within a cool 24 hours of starting. Despite failing, it is probably the best day of climbing I've ever done in these mountains, and it certainly turned into the most epic experience I've had here.