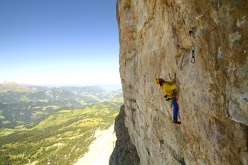 Over a three day period in September 2014 the South Tyrolean mountaineers Simon Gietl and Andrea Oberbacher forged a new rock climb up Heiligkreuzkofel, also referred to as Sass de la Crusc. Voodoo-Zauber, climbs six independent pitches up the righthand side of the face, to the right of the Central Pillar put up in 1970 by Hans Frisch and P. Corradini, and to the left of Ihr Affen, established in 1994 by Christoph Hainz and Kurt Astner.

Voodoo - Zauber was climbed ground-up, without fixed ropes or bolts, and is dscribed by the first ascentionists as breaching "good quality rock, worth repeating."

From Santa Croce (2045m), beneath Sass dla Crusc, follow path no. 7 that leads beneath the mountain past scree slopes and alpine meadows up to the ferrata. The path initially leads over scree to then climb up rightwards. At the last level section bear left and scramble up to the base of the route.

From the top of the route follow the crest and path right (south) to reach Furcla dla Crusc 2609m and the cables belonging to the ferrate. Walk down this to meet up with the path that leads to the Santa Croce refuge (1.30 hours).

Some Friends on the crux pitch had previously been left in-situ for the redpoint ascent.

COMMENTS for the route "Voodoo - Zauber"

No comments found for Voodoo - Zauber 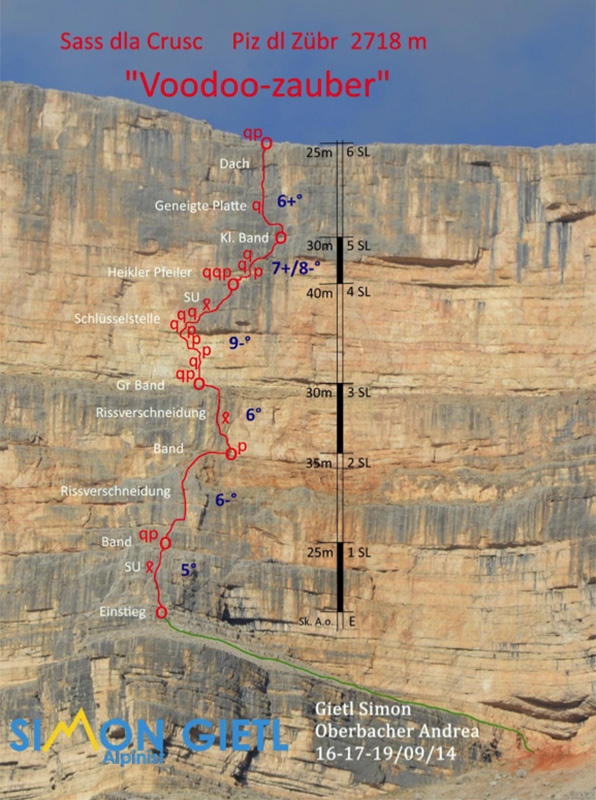