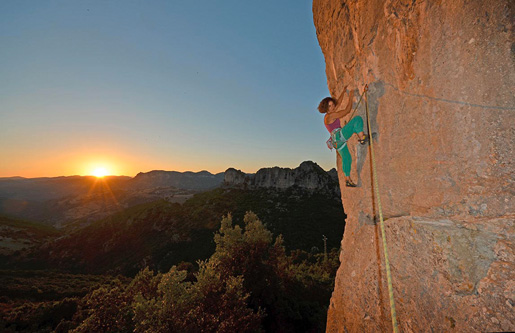 Castello di Jerzu is great crag in SE Sardinia discovered by myself in in Janaury 1989. The first route to be bolted here was "Sogno a colori" and during the first three years 60 routes were established to ensure a bare minimum of routes for visiting climbers.

Thanks to Giuseppe Garippa the area received regional funding in 1996 but the new routing was left to me as he was transferred to a different town. Since then I have established over 140 routes on the three main walls, always on my own, with the sun, wind, rain and even snow. I bolted numerous routes in the 6a - 6c region with some easier routes to make up for the fact that the crag was, at least initially, fairly difficult.

All routes are protected by glue-in bolts and not a single hold has been chipped. The only route which has been modified is Penthotal - a flake was glued back on after this broke off unfortunately...

No comments for Castello di Jerzu

All year. The sun reaches the crag in the early afternoon.