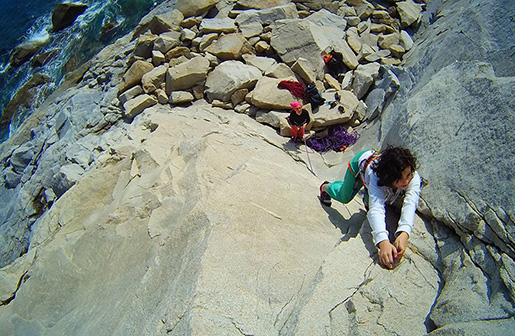 The small crag Cala Usai may be nothing more than an old granite quarry, but the marine environment and the quality of its rock makes it a wonderful place, certainly worth exploring when visiting southern Sardinia. Furthermore, the crag is the only one in the area and close to the one of the islands most famous tourist attractions, with its splendid sea and beautiful beaches such as the enchanting Ti Mi Ama.

The first routes were put up towards the end of the eighties by Ferruccio Svaluto Moreolo, a mountain guide from the Belluno area of Northern Italy, and in that period there were only a cluster of routes in the quarry that were used by Ferruccio to teach climbing to the children on holiday at the nearby tourist resorts. The gear was fairly basic and at times not even in stainless steel. At the start of the nineties I established the odd route and the crag because famous above all because it was featured on the cover of Sardinia’s second climbing guidebook, Pietra di Luna.

The crag fell into disuse as limestone crags with their difficult routes became all the rage. Cala Usai boasted only a dozen routes, the hardest of which was just about 7a, except for Hard Rock (that featured on the cover of an old Rivista della Montagna). About 5 years ago the crag was rediscovered thanks mainly to Andrea Mannias who put up a series of new climbs in the sector to the right that had, until then, remained untouched. Subsequently he was joined by myself and another naturalized Piedmontese Sardinian, Paolo Contini, who lives nearby. It is thanks above all to Contini that a bolt fund was created to change all the belays in stainless steel 316L and rebolt various old routes. Some new routes were added up the remaining white spaces and now, from the original 10, the crag has expanded to 37 routes.

Today the crag, despite not being able to compete with limestone crags Quirra or Jerzu, offers an great alternative to those who want to sample the thrill of climbing up granite in safety (the crag is completely bolted) while enjoying some truly unique surroundings. In summer you can do dive directly off the base of the outcrop. The granite, fragile at times, is pleasant to touch and does not become greasy, even when the sirocco wind blows. This is why you can climb at Cala Usai all year round, in summer after15, although it has to be said that the hardest routes are probably off-limits at this time of year.

No comments for Villasimius - Cala Usai