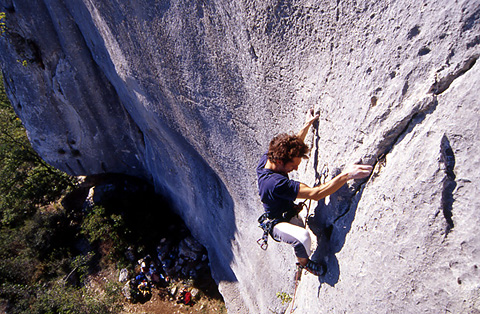 Dvigrad castle, constructed in the 11th century close to a slender, south-facing limestone outcrop, was abandoned in the 17th century due to a pest outbreak. Nowadays only the ruins remain of one of Istria's most famous hallmarks, but it still dominates the Lemme channel, the plain below and the limestone crag opposite. Climbing first began on this outcrop in the late 80's, when the Italian climber Manolo established the first routes including, amongst others, his still unrepeated 8b+ slab testpiece Malvazija.

Malvazija is an exception though, for the vast majority of the 70 routes are graded 6a/b. Add to this the quality of the rock, the beauty of the surrounding area, and the nearby Coratian sea, and you immediately have all the necessary ingredients for your next holiday abroad! But be warned, the lack of shade and the strong Balcan winds render summer unbearably hot.

From Italy cross the border into Slovenia and follow signs for Croatia and Rovigno/Pola. Close to Rovigno turn off the E751 left for Korenici. Drive through the village, turn right at the fork and park the car at the obvious sign which indicates the camping and climbing area. Continue along the obvious path to the crag in about 10 minutes.

Numerous hotels, B&B's and campsites are to be found in the vicinity. 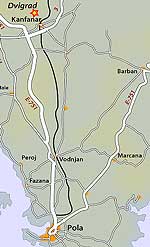 Spring and autumn. Summer is often too hot. Climbing is possible on sunny winter days.