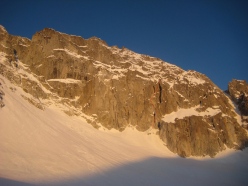 Climbing this route was extremely satisfying, it's only five pitches high but all are extremely beautiful, difficult and different, the rock is always splendid and the scenery is grandiose.

The conditions were relatively good, with a thin ice vein on pitches one and three which allowed the leader (at least) to climb well. The rock sections are just as demanding and although we believe the aid sections can be climbed free, we preferred to continue with crampons clipped on, ready for the next mixed pitch. Due to the poor snow on the upper section we were forced to abseil off from the shoulder where the major difficulties had come to an end; one can continue far more easily up to the summit from here.

From Rifugio Segantini (1 hour from the summer car park) head towards Bocca d'Amola (2 hours) to beneath the face. The route is loacted to the right of the central corner of the Via delle Guide, at the base of an obvious large pillar split by a long, diagonal crack. Climb the mixed corner at the base of the pillar to reach the peg and sling on the right after circa 15m.

Four abseils with in-situ gear. The first two are on the route, the third is off route to the left (facing the mountain). The fourth is on a snow mushroom.

The five pegs we used were left in-situ. Take a set of camming devices up to #4, micro 1 and 0, nuts, 2-3 ice screws, hammer and pegs may be found useful. Rock shoes recommended for the leader, two 60m ropes.

COMMENTS for the route "Depravation"

No comments found for Depravation 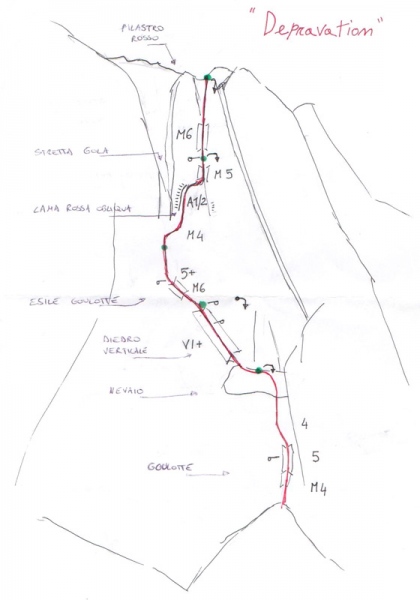