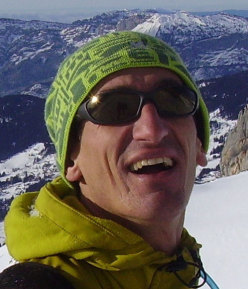 Great mourning in the ski mountaineering world and that of the mountains in general: on Sunday 17/06/2012 the 41 year-old ski mountaineering champion Stephane Brosse died as a result of a cornice collapse on Aiguille Argentiere (Mont Blanc).
Photo by www.millet.fr

Great mourning in the ski mountaineering world and that of the mountains in general: on Sunday 17/06/2012 the 41 year-old ski mountaineering champion Stephane Brosse died as a result of a cornice collapse on Aiguille Argentiere (Mont Blanc).

Stephane Brosse was a ski mountaineering champion. He had won the World Championship three times, as well as countless other races. A true emblem of this sport. A symbol which left us while engaged in one of his projects: the Mont Blanc traverse, those two days from France to Switzerland, from Contamines Montjoie to Champex, together with the Catalan champion Kilian Jornet Burgada. It all happened yesterday morning on the summit of Aiguille d'Argentiere in the Mont Blanc range which the ski alpinist loved so much. The many news reports which followed after the tragic accident talk about a collapsed cornice and a 600m fall which proved fatal to one of undisputed kings of ski mountaineering.

Stephane Brosse was born on April 28, 1972 in Pont-de-Beauvoisin in Savoy. The 41-year-old was undoubtedly one of leading ski mountaineers of our time. Ever since taking to ski mountaineering aged 18, Brosse loved and dominated this sport and his curriculum is frightening in both quality and intensity. Brosse was crowned World Champion three times, in three different disciplines: in 2006 he won team gold, in 2004 the team relay event, while in 2002 he was crowned individual champion. In 2001 he won the European team championship along with Pierre Gignoux, while in 1999 he was crowned French champion with Patrice Bret. In addition, Brosse won the Tour du France equivalent of ski mountaineering - the Pierra Menta - three times: in 2001, 2005 and 2006. While in 2005, along with Patrick Blanc and Guido Giacomelli, he won the university of ski mountaineering races, namely the prestigious Mezzalama Trophy. To which must also be added his two victories, in 2004 and 2006, of the legendary Swiss competition Patrouille des Glaciers.

But Brosse stood out not only because of his many victories in the world's most prestigious competitions. Brosse was in fact a complete ski mountaineerer who knew how to combine being a superbly fast athlete with the creativity needed to explore limits. Brosse had set the speed record from Chamonix to the summit of Mont Blanc and back in 2007 along with Pierre Gignoux in 5 hours 15 minutes and 47 seconds, while with Lionel Bonnel het stopped the clock after an astonishing 21 hours 11 minutes after having completed the classic Haute Route Chamonix - Zermatt. Brosse's approach towards new goals was totalising. On Saturday morning though this all came to an abrupt halt. Stopped, forever, this final ski which should have been the first stage of his project to traverse "some of the most spectacular mountains in the world such as Mount Elbrus, Matterhorn, Aconcagua, Mount McKinley, Everest, in the shortest time possible."

Stephane Brosse has left a huge void. We would like to remember him with the words of France's Minister of Sport, Youth and Education: "Stephane was an exceptional athlete and man. His love for the mountains and his sport command respect. His many achievements, in particular the Patrouille des Glaciers and the legendary Chamonix-Mont-Blanc Chamonix route, will remain etched in our memory forever. I share the grief of his family and friends, and I offer my deepest condolences to all those who knew and loved him."