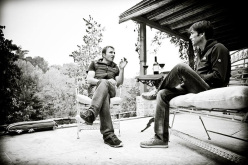 "It was always a dream to climb a line like this on an 8000m peak." This is how Ueli Steck begins his chat with Italian alpinist Hervè Barmasse. The interview was made during a meeting at the SCARPA headquarters just a week after Steck's astounding solo ascent of the immense South Face of Annapurna. It's an intense flight that touches on Steck's 2007 and 2008 attempts, his climbing legends, the differences between soloing in the Alps and the Himalaya, his training and the importance of physical and mental strength. And, above all, the importance of doing things for yourself only. Not to be missed!